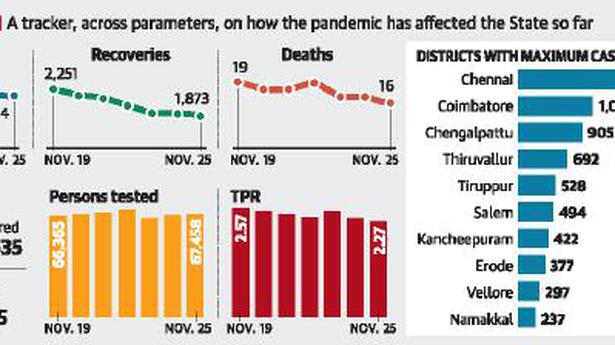 At the same time, as many as 1,873 patients were discharged following treatment on Wednesday, taking the tally of those recovered to 7,51,535. Health officials said 16 deaths had been recorded in the last 24 hours due to the infection. So far, 11,655 persons have lost their lives to COVID-19 in the State.

In Chennai district, 467 more persons tested positive and 536 persons were discharged after treatment. The district recorded more four deaths in the day. As on date, 4,206 persons were under treatment, including those being treated at home. As many as 2,13,417 persons have been infected in the district so far.

Health officials said 35 cases were imported from outside the district. So far, as many as 2,05,378 persons have been discharged after treatment, while 3,833 persons have died due to the infection.

In Coimbatore, 149 more tested positive, while 179 persons were discharged after treatment. The district also recorded two deaths. As on date, 679 persons were undergoing treatment, either at home or in hospitals.

According to the daily health bulletin of the Directorate of Public Health, new infections were below 10 in five districts. These include Perambalur, which saw one case; Ramanathapuram with two new cases; Ariyalur with two cases; and Tirupathur and Kallakurichi with five cases each.

Two persons, whose deaths were recorded in the last 24 hours, had no co-morbid conditions. The deceased were both men, aged 36 and 32.

Fourteen others, including six of whom were admitted in private hospitals, died of the infection.

Till Tuesday, 17,96,259 passengers who entered the State through various modes, have been screened. Of them, 6,742 persons had tested positive, health officials said.

The State recently approved a COVID-19 testing centre in Krishnagiri. With this, there are 218 testing centres in the State, of which 67 are in the government sector and 151 in the private sector.

One of the lasting images of the pandemic is surgical masks discarded everywhere — from markets to pristine beaches. Now, a company wants to...
Read more