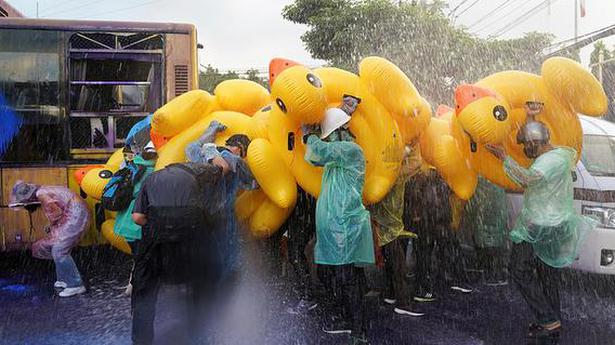 The Thai police on Tuesday fired water cannon and tear gas on pro-democracy protesters trying to reach Parliament, where lawmakers were debating possible changes to the military-scripted Constitution.

Eighteen people were injured in clashes as protesters inched closer to Parliament, in the latest round of demonstrations demanding reform to the Thai constitution, monarchy, and for the current Prime Minister to quit.

As night fell, protesters and the police were locked in a tense stand-off at the main gates of the Parliament building. “Stop accusing us of violating the law, you (police) are violating the law by hurting people,” prominent student leader Parit “Penguin” Chiwarak said through a megaphone from a truck. “We are fighting for a better future of our country and for everyone so don’t fire water cannon on us.”

Student-led rallies have rocked Thailand since July, demanding the removal of Prime Minister Prayut Chan-O-Cha — who took power in a 2014 coup — and reform of the military-scripted constitution. Some have also called for reforms to the monarchy, sending shockwaves through the Thai establishment.

Biden and his team have begun discussions on the possible outlines of an infrastructure package with members of Congress, particularly mindful that Texas’ recent...
Read more
Bharat News