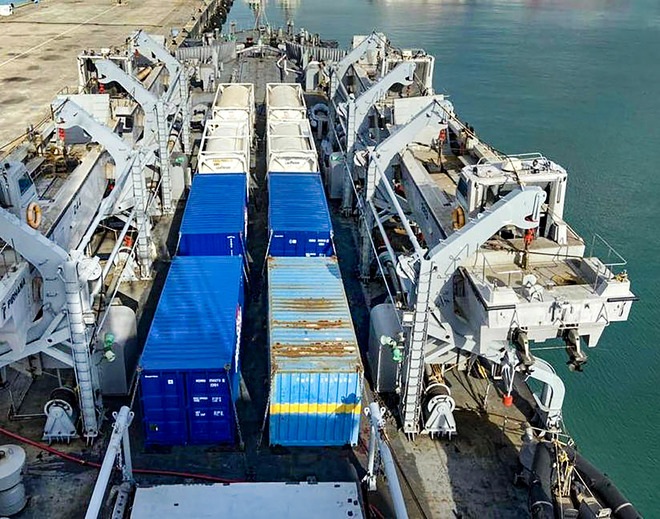 In all, there are nine warships sailing across the world carrying Covid-related equipment.

Indian Naval Ship Talwar entered the port of New Mangalore in Karnataka on, it carried in two tons liquid oxygen tanks from Bahrain. INS Kolkata, is deployed in Persian Gulf, it departed Kuwait on Thursday after embarking 27 tonne oxygen tanks, 400 Oxygen cylinders and 47 concentrators. In addition, four other warships are also enroute Qatar and Kuwait, to embark around nine 27-tonnne oxygen tanks and more than 1,500 oxygen cylinders from these countries.

On the eastern seaboard, Indian Naval Ship Airavat, departed Singapore on Thursday with more than 3600 oxygen cylinders, eight 27 ton oxygen tanks, 10,000 rapid antigen detection test kits and 7 concentrators. The Landing platform dock, the INS Jalashwa remains deployed in the region, standing by to embark medical stores at short notice. INS Shardul, the Landing Ship Tank has sailed out of Kochi and is on the way to Persian Gulf to bring three liquid Oxygen filled cryogenic containers. Meanwhile, A C-17 aircraft of IAF today took off from Perth Australia, carrying four empty cryogenic oxygen containers. It was expected to land at Panagarh in West Bengal tonight. — TNS