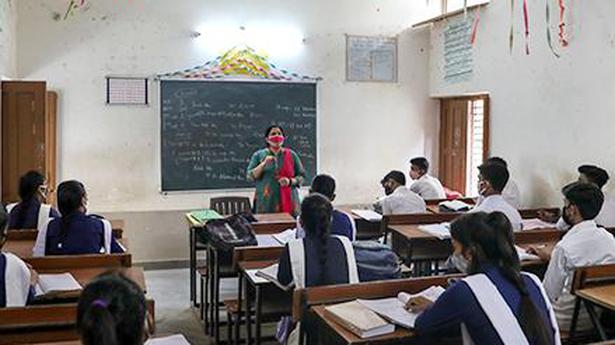 Around 50 students of various senior secondary schools in Rewari and Jhajjar districts of Haryana have tested positive for COVID-19 over the past fortnight.

Haryana Education Minister Kanwar Pal told The Hindu that many students had tested positive in schools across the State during routine health check-ups but there was no proposal to withdraw or amend the order for holding classes. He said the department was monitoring the situation. It is estimated that around 100 students have tested positive in Rewari and Jhajjar since schools opened in September.

Six students in Pali and 19 students in Kund tested positive during medical examination of employees and students at a camp organised recently by the district health department.

“Samples of 46 students in Kund and 32 in Pali were taken. The results came back on Tuesday. Usually, we shut the school for 48 hours in the event of any positive COVID-19 case, but this time the two schools have been shut for 15 days. The principals and headmasters of all schools have been directed to get their premises sanitised,” District Education Officer (Rewari) Rajesh Kumar said, adding that the 25 students were asymptomatic.

Similarly, around 25 students across a dozen government senior secondary schools in Jhajjar tested positive for COVID-19 this month. The samples were taken randomly from among 1,000 students. “A total of 34 students have tested positive for COVID-19 in government schools since September,” said District Education Officer (Jhajjar) Brahmprakash Rana.

The Haryana government had allowed all schools to hold guidance sessions for Class IX-XII students in the last week of September. The students were allowed to attend school only with the written consent of their parents. In October last week, the education department directed holding of regular classes for three hours daily.

Rewari has 150 senior and higher secondary schools with a daily attendance of around 3,000-4,000, Mr. Kumar said. A couple of students in each school were found infected during earlier health check-ups, he said.

Education departments of both districts have asked health authorities to hold special camps in all government schools to take samples of the employees, students and parents.

Knowledge of biology or biological sciences a must for MBBS admission:...

A candidate should have studied them at the 10+2 stage, the Court says. The Supreme Court has held in a judgment that prior knowledge...
Read more
World

Extinction Rebellion | Rebels with a green cause

The environmental group that seeks to turn public attention to climate change through shock protests has now branches in 75 countries When Extinction Rebellion...
Read more
National

Knowledge of biology or biological sciences a must for MBBS admission: Supreme Court

A candidate should have studied them at the 10+2 stage, the Court says. The Supreme Court has held in a judgment that prior knowledge...
Read more