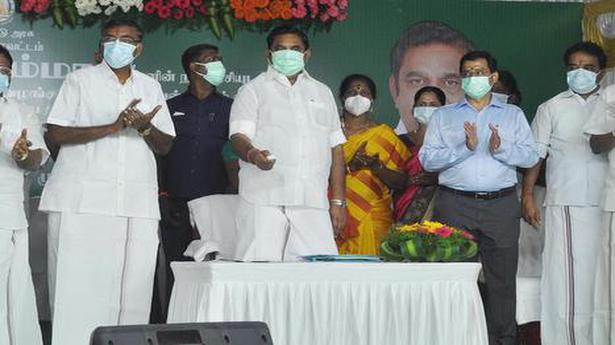 Tamil Nadu Chief Minister Edappadi K. Palaniswami said on Thursday that the 7.5% horizontal reservation in medical colleges for NEET-qualified government school students was his brainchild, and no one proposed it.

Speaking at an event at Vanavasi in Salem, he traced the history of the NEET, which was mooted when the UPA was in power at the Centre, and said the AIADMK government opposed it legally. But it was forced to adopt it following the Supreme Court’s order.

The plight of the poor

“I thought about the plight of poor children, and of the ways to help them. That is when I got the idea of internal reservation, and we introduced 7.5% reservation,” he said. “No Opposition leader or parties or public had made such a request,” he said. Thanks to the reservation, in Salem alone 21 students had joined medical courses, and the 21st candidate joined with a NEET score of 211.

Even the gross enrolment ratio in Tamil Nadu was the highest in the country, growing from the 32% under the former Chief Minister Jayalalithaa. The State also fared well in other spheres, winning several national awards, the latest one being for water management.

He accused Leader of the Opposition and DMK president M.K. Stalin of spreading false news about Ministers. “He should instead offer constructive suggestions, through which he could at least try and retain his place in the Opposition [after the 2021 Assembly election],” Mr. Palaniswami said.

The Chief Minister said Mr. Stalin would end up being a “statement hero” because every day he was issuing statements against the government. He said public welfare was not promoted when the DMK was in power. The AIADMK government alone was working for the welfare of the people.

As for the COVID-19 pandemic, Mr. Palaniswami said he had toured all but four districts to conduct review meetings with the district administration, and health and revenue officials. “Thanks to this, the spread of COVID-19 in Tamil Nadu has been contained and positivity rate is coming down,” he said.

He laid the foundation for several projects and inaugurated completed works on an investment of ₹291.94 crore. He opened the work to desilt lakes and build two check-dams at a cost of ₹44.43 crore under the Mettur surplus water scheme. Tamil Nadu Magnesite Limited was reopened for operations, and this benefited 534 persons directly and 2,000 persons indirectly.

The Congress on Monday exuded confidence that it would regain power after a hiatus of five years with a...
Read more
National

The Tamil Nadu State Marketing Corporation Limited (Tasmac) is back to the token system that it was following post the lifting of the...
Read more
Sport

The Tamil Nadu State Marketing Corporation Limited (Tasmac) is back to the token system that it was following post the lifting of the...
Read more