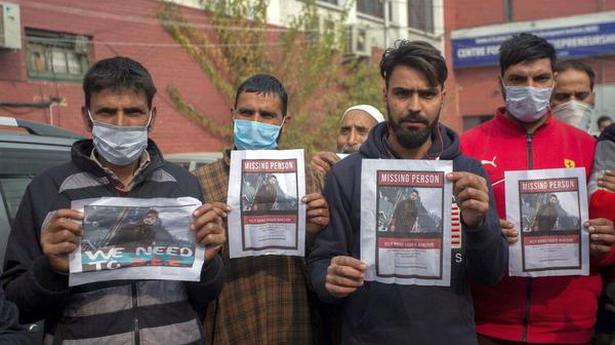 The family members of a soldier, who was allegedly abducted by militants in south Kashmir’s Shopian three months ago, on Wednesday held a protest in Srinagar and asked the authorities to trace him.

“It has already been three months since my son went missing. We approached officials at all levels but nobody has helped us in retrieving the body, if he has been killed. If he is alive, then the authorities should help us in locating him,” missing soldier Shakir Manzoor’s father Manzoor Ahmad said.

Rifleman Manzoor, 24, a resident of Shopian’s Reshipora village was allegedly abducted on August 2 when he was on the way to celebrate Id at home. The car in which he was travelling was found burnt in the neighbouring Kulgam district.

According to the family, his torn clothes with bloodstains were also spotted inside an orchard near his home. Later, a person on social media claimed that the soldier was killed and his body was not being returned due to the pandemic. The police suspected the role of the local militants in the incident.

The family sought the intervention of Lt. Governor Manoj Sinha and demanded a CBI inquiry.

According to Mr. Ahmad, the abductors arrived in six to eight vehicles and everyone in the village saw them.

“For five to six days they would drag my son tied to a vehicle in the villages. The police did not come to help me even once during those days,” he said.

He said his son disappeared in the villages nearby. “Why can’t the authorities spot his body so far?” he asked.

The family members were also carrying placards “We want justice”.

Share
Facebook
Twitter
Pinterest
VK
WhatsApp
Previous article‘Minnesota get out and vote’: Trump’s son Eric asks people to cast votes, week after US Elections ended
Next articleNDA to form new govt in Bihar next week with Nitish back as CM
- Advertisement -