Amid protests, Peru gets its third President in a week 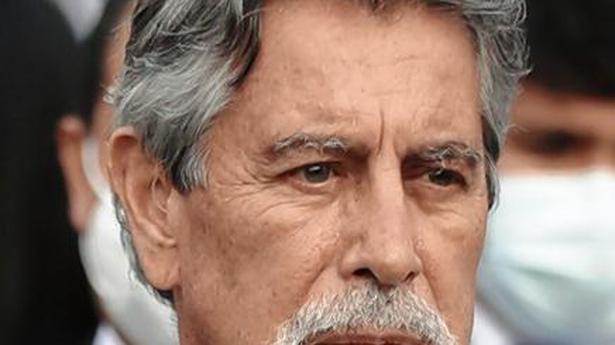 Peruvian lawmaker Francisco Sagasti is set to be sworn in as interim President on Tuesday after being voted for by Congress in a bid to help calm anger on the streets amid deadly protests and the departure of two presidents over the last week.

Mr. Sagasti, a legislator from the centrist Purple Party, will be sworn in at 4 p.m. to fulfil a government mandate until July next year, which would include holding a new presidential election scheduled for April 11.

The Andean nation has been shaken since the abrupt ouster in an impeachment trial of popular leader Martin Vizcarra last Monday. His successor, Manuel Merino, resigned on Sunday after two young people died in protests against his government.

Mr. Sagasti’s appointment appeared to calm tensions, though a deep mistrust of the country’s politicians still remains and on Monday night hundreds of people marched in the capital Lima, with calls for a new constitution and “justice for the fallen”.

Mr. Sagasti, 76, an engineer and former World Bank official, said on Monday night that he was considering names for Ministers in his government and did not rule out including members of the Cabinets of his predecessors. “If they are people with experience, integrity and the desire to work, I think we would do wrong to leave them aside,” Mr. Sagasti told local television station Canal N.

Mr. Sagasti will be Peru’s fourth president in less than three years, after the departures of Mr. Vizcarra and Mr. Merino, and the resignation of Mr. Kuczynski in 2018 on allegations of corruption.

MDMK general secretary Vaiko on Sunday urged the government to hasten the process of hearing of the Mekedatu dam...
Read more
National

This is the first time Iran has reported an emergency shutdown of the plant, located in the southern port city of Bushehr Iran’s sole...
Read more
National

Work on resort to resume at Malankunnu

KASARAGOD A decision has been taken to resume construction of a five-star hotel at the Bekal Resort Development Corporation (BRDC) resort site at Malankunnu...
Read more
Business

The covid-19 pandemic may have put international travel plans on the back-burner, but it has not stopped...
Read more
- Advertisement -

This is the first time Iran has reported an emergency shutdown of the plant, located in the southern port city of Bushehr Iran’s sole...
Read more

More than 500 million doses administered in less than a month, according to National Health Commission’s figures China has now administered more than one billion...
Read more

The Taliban said on Sunday they were committed to peace talks, adding they wanted a “genuine Islamic system” in Afghanistan that would make provisions...
Read more

Muezzins issuing high-decibel calls to prayer have long been part of Saudi identity, but a crackdown on mosque loudspeakers is among contentious reforms seeking...
Read more
- Advertisement -