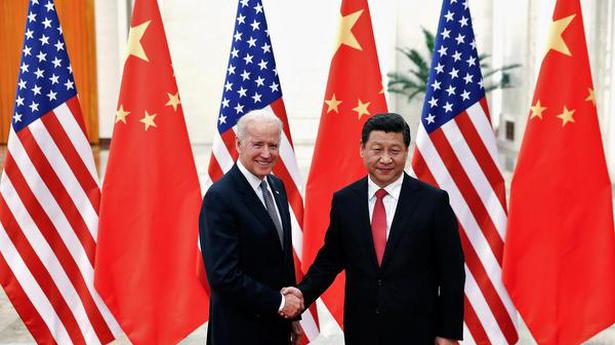 Few observers expect a pause in the confrontational ties.

As much as the world is waiting to see how Joseph R. Biden Jr., the 46th President of the United States, reorients American foreign policy, the focus of the new administration in Washington in its first 100 days will, as is the case with any new government in any country, inevitably be on matters domestic.

That will be all the more true for Mr. Biden, who takes over amidst a raging pandemic and enormous economic challenges.

Confronting these economic challenges at home will, however, hinge on whether or not the Biden administration will be able to get one crucial relationship right – fraying ties with China that have descended into outright confrontation, and for many observers, now teeter on the edge of an abyss.

As of November 10, Beijing has responded carefully to Mr. Biden’s victory, among few nations that had not yet reached out to the President-elect or acknowledged his victory. “We noticed that Mr. Biden has declared election victory,” the Foreign Ministry’s spokesperson Wang Wenbin said in a terse response when asked about China’s silence. “We understand the presidential election result will be determined following the U.S. laws and procedures. We always believe China and the United States should strengthen communication and dialogue, manage differences on the basis of mutual respect, expand cooperation based on mutual benefit, and promote the sound and stable development of China-U.S. relations.”

Despite President Donald Trump during the campaign trying to suggest Beijing preferred him to lose, the fact is few observers in China expect a pause in an increasingly confrontational relationship. Moreover, the concern is even if Mr. Biden may be more predictable and the relationship may return to more institutional engagement, he may yet turn out to be even harder to deal with should he be more effective in reaching out to America’s allies and be more vocal on human rights issues, Xinjiang, Tibet, Hong Kong and Taiwan.

“No matter who wins eventually, in general, both parties are on the same page on how to deal with China,” strategic affairs expert Yuan Zheng of the Chinese Academy of Social Sciences told the Communist Party-run Global Times this week. “In the short run, China’s relations with the U.S. will be less tense. But in the long-term, the bilateral ties will face bigger challenge as Biden underlines U.S. leadership, and he will spare no effort to align with its allies and partners to check and balance China, which seems to be more threatening to China in comparison to Trump administration.”

Indeed, it is striking how China figures prominently in two key policy documents of the Biden-Harris campaign, to “Restore American Leadership Abroad” and to “Ensure the Future is Made in America”.

The documents outline a multi-pronged response to China, ranging from promoting democratic values more forcefully to continuing the efforts launched by Mr. Trump to bring back American companies and penalise Chinese firms that don’t play by the rules.

Mr. Biden plans to soon hold “a global summit for democracy” and to call on technology companies “to make concrete pledges for how they can ensure their algorithms and platforms are not empowering the surveillance state, facilitating repression in China and elsewhere”. Mr. Biden has pledged to work “with our democratic allies to develop secure, private sector-led 5G networks” and “reduce their dependence on competitors like China”, as well as to “strengthen our alliances with Japan, South Korea, Australia and other Asian democracies”.

The “Made in America” plan states his administration will “stand up to the Chinese government’s abuses” and “insist on fair trade”, while taking steps to “bring back critical supply chains to America so we aren’t dependent on China or any other country for the production of critical goods in a crisis.” It outlines punitive measures on any companies that misrepresent the country of origin of their goods and possible sanctions on Chinese companies for cyber espionage, and is critical of the “phase one” trade deal agreed by Mr. Trump, under which tariffs remain on $360 billion worth of Chinese goods, for not doing enough.

On climate change too, which is expected to assume prominence in a Biden foreign policy and has been seen by some Chinese analysts as one area where both countries could cooperate, Mr. Biden has said he will takes steps aimed at “pressuring China—the world’s largest emitter of carbon—to stop subsidizing coal exports and outsourcing their pollution to other countries by financing billions of dollars of dirty fossil-fuel energy projects through their Belt and Road Initiative.” Among his proposals is “a carbon adjustment fee” that could potentially target not only China, but India and other emitters too.

If it’s clear that Mr. Biden believes the path to addressing his economic challenge at home will run through Beijing, he will face a difficult balancing act of achieving his economic goals at home – which will, his campaign’s policy documents underline, require continuing many of Mr. Trump’s tough economic policies aimed at China – while at the same time, finding ways to pull back from the brink the relationship between the world’s two biggest powers.