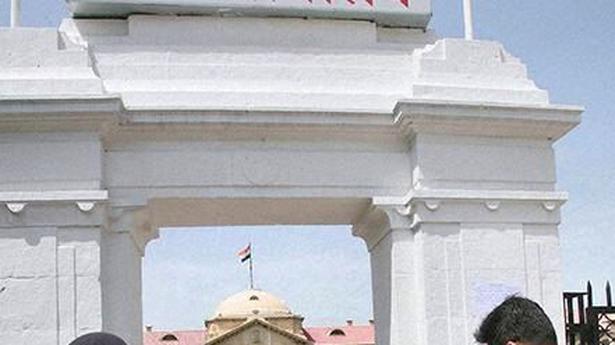 The Allahabad High Court has provided interim protection from arrest to two persons who were booked for sedition during the protests against the Citizenship Amendment Act earlier this year in Prayagraj.

A division bench of Bachchoo Lal and Subhash Chandra Sharma, however, refused to quash the FIR against them saying there were no grounds for it.

Ahmed Ali, a Muslim cleric, and Suhaib-ur-Rahman, who heads a Muslim outfit, were booked on March 6, under Sections 124A and 153B of the IPC in an FIR lodged at the Kareli police station.

The two were accused of distributing unlawful pamphlets during a protest in Prayagraj against the CAA, the National Register of Citizens and the National Population Register.

The counsel for the petitioners submitted that the two were not named in the FIR and that it be quashed.

The name of one of the accused, Suhaib-ur-Rahman, came into light in the second statement of Santosh Kumar Dubey, S.H.O Kareli. A co-accused Fazal Khan allegedly disclosed their names after being arrested.

Arguing that there was no cogent evidence on record to connect the petitioners with the alleged offence, their counsel said the two were falsely implicated in the case only for harassment.

The government counsel opposed the prayer for quashing of the FIR and argued that from the allegations, prima facie a cognisable offence was made out against the two.

The court directed the police not to arrest the two till it submitted its report in the case. “…in the peculiar facts and circumstances of the case and submissions advanced by learned counsel for the parties, we dispose of this writ petition with the direction that the petitioners shall not be arrested in the aforementioned case till the submission of police report under Section 173(2) Cr.PC provided that petitioners shall participate and cooperate with the investigation,” the court said in an order dated November 9.

The BJP’s stakes are higher in the east; Congress’ leadership question has led to a piecemeal strategy  The announcement of the poll dates for the...
Read more

The Enforcement Directorate has attached assets worth crores in connection with extortion from contractors, coal traders and transporters in the Magadh Amrapali coal block...
Read more

This sends a not-so-subtle message to Congress leadership. Barely two months after Congress president Sonia Gandhi’s reachout to the group of dissenters (G-23), they...
Read more

Chief Minister B.S. Yediyurappa will be on a two-day visit to Shivamogga on Sunday and Monday to take part in many programmes including a...
Read more
Bharat News