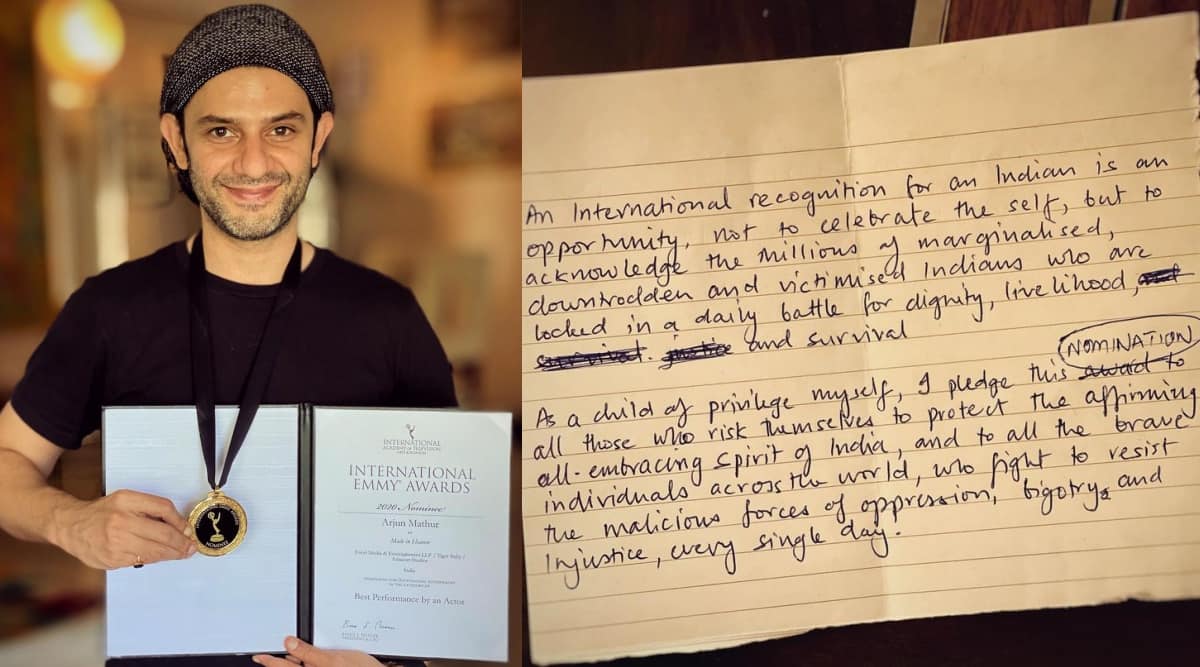 Actor Arjun Mathur took to social media to share the speech he ‘didn’t get a chance to make’ at the International Emmy Awards 2020. He was nominated in the Best Actor category for the Amazon Prime Video series Made In Heaven. Unfortunately, he didn’t win.

On Tuesday, Mathur shared a picture of the handwritten winning speech he had penned for the award ceremony. It read, “An international recognition for an Indian is an opportunity not to celebrate the self, but to acknowledge the millions of marginalised, downtrodden and victimised Indians who are locked in a daily battle for dignity, livelihood and survival.”

The actor further wrote, “As a child of privilege myself, I pledge this nomination to all those who risk themselves to protect the affirming, all-embracing spirit of India, and to all the brave individuals across the world, who fight to resist the malicious forces of oppression, bigotry and injustice, every single day”.

Though Arjun Mathur couldn’t win the award, he thanked his fans for the “endless river of love and support that have flowed my way over the last two months.” He also congratulated the team of Netflix show Delhi Crime which won the award for Best Drama Series.

The International Emmy Awards 2020 was held virtually on November 23 and the awards were presented by actors Kelsey Asbille, Haluk Bilginer, Paul Blackthorne, Tituss Burgess and Indira Varma among others. Another Indian show, Four More Shots Please, was also nominated but did not score any wins.

After the Centre decided to allow vaccinations for everyone above 18 from May 1, Opposition leaders on Monday sought to claim credit for making...
Read more
National

The Centre is set to accept the Serum Institute of India’s (SII) request for a ₹30 billion ($400 million) grant to boost its capacity...
Read more