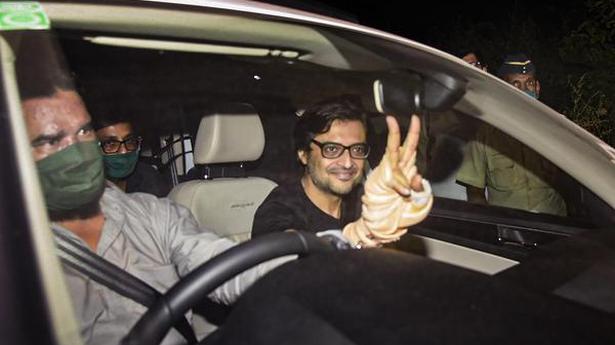 He has been charged with deterring the police from discharging their duty when they came to arrest him on November 4.

Republic TV editor-in-chief Arnab Goswami has filed for anticipatory bail before the City Civil and Sessions Court in a case charging him with deterring the police from discharging their duty when they came to arrest him on November 4.

The FIR was filed at the NM Joshi Police Station under Sections 353 (assault or criminal force to deter public servant from discharge of his duty), 504 (intentional insult with intent to provoke), 506 (punishment for criminal intimidation) and 34 (acts done by several persons in furtherance of common intention) of the Indian Penal Code and Section 3 (mischief causing damage to public property) of The Prevention of Damage to Public Property Act.

Under Section 353, he can be punished with imprisonment that may extend to two years, or with a fine, or both. Mr. Goswami was granted interim bail by the Supreme Court on Wednesday in the 2018 case of abetting the suicide of interior designer Anvay Naik.

A suicide note believed to have been written by Naik mentioned that Mr. Goswami did not pay him ₹83 lakh for the “Bombay Dyeing studio project.”

In another twist to the factional fight in the State BJP over the demand for a leadership change, Arvind...
Read more
Trending

Sector continues to be a net creator of jobs. With one of the strongest deal pipelines and a bright business outlook, the Indian IT industry...
Read more
National

They have been set up under Indo-Israel collaboration to help raise farm income, among others Three Centres of Excellence for horticulture crops set up under...
Read more
Entertainment

When a producer expected Neena Gupta to ‘spend the night’ at...

In another twist to the factional fight in the State BJP over the demand for a leadership change, Arvind Bellad, MLA, identified with the...
Read more

They have been set up under Indo-Israel collaboration to help raise farm income, among others Three Centres of Excellence for horticulture crops set up under...
Read more

‘Life of Butterflies’: a documentary that chronicles butterfly behaviour in great detail

A riot of colours unfold on the screen as beautiful butterflies flit from one plant to another, in the opening shots of Life of...
Read more

Private buses allowed to operate in Kerala on week days

Private buses have been allowed to operate on week days from Friday adhering to the COVID-19 protocol and following the odd-even registration number...
Read more
- Advertisement -