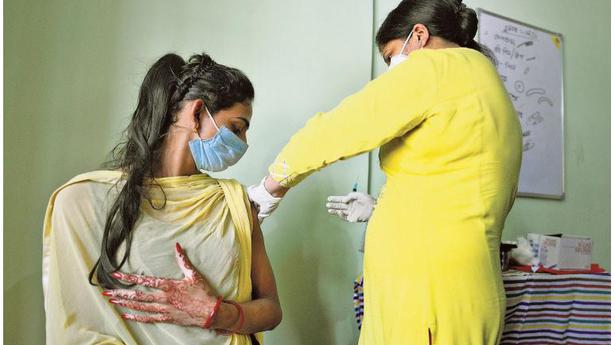 Covaxin doses offered at a shelter home for the community in Guwahati.

Azizur Khan was caught in two minds. But her faith in Swati Bidhan Baruah, the first transgender judge in the northeastern region, convinced her to take a Covaxin shot.

She was the youngest of some 40 transgenders in the 18-44 age group who were vaccinated against the SARS-CoV-2 virus at Tritiyo Nivas, a shelter home for the third gender in Guwahati’s Hatigaon locality.

“I thought it would be better to have some kind of protection so that Eid next year is not as subdued as this year, and people can interact without any fear of infection,” the 25-year-old said.

There are about 300 transgender people in Kamrup (Metropolitan) district comprising Guwahati and some areas beyond. Some of those who turned up for the vaccination programme could not take the shot as they had either not registered or did not carry any identity card.

“Eid at home held back many from the community who are Muslims. They will be covered in the next few sessions along with 15 others who are 45 years and older,” Ms. Baruah told The Hindu.

The transgender-specific vaccination conducted jointly by the All Assam Transgender Association and the State Directorate of Health Services was being billed as the first such programme for the community.

“I spoke with trans activists elsewhere in India and they said no other State government has taken any initiative for the community. In places like Hyderabad, members of the community were even discriminated against and denied vaccination,” said Ms. Baruah, the association’s founder who took the first jab at Tritiyo Nivas.

The doubts a few harboured about the vaccine evaporated after she led the way and reassured them that she did not suffer from any immediate side-effects.

“I thought we would be left out of the vaccination programme like many of us were from the National Register of Citizens because of being outcasts in the family. It is nice to be counted as one of millions of Indians worthy of being vaccinated,” said a 37-year-old transgender, the oldest of those who took the shots.

Ms. Baruah said her association would coordinate with Health Department officials to inoculate transgenders in other parts of Assam in the next phase.

‘Vaccines will continue to remain the centrepiece of our arsenal against COVID-19,’ says Anthony Fauci The United States has announced that it will spend $...
Read more
Trending