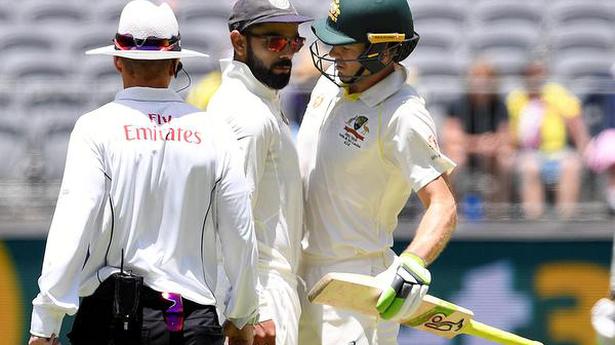 ‘With Virat it is a funny one, we love to hate him but we also love to watch him bat as cricket fans’, says the Australian Test captain

Test captain Tim Paine says Australians have “polarising” opinions on India skipper Virat Kohli, one whom they love to hate as rivals but at the same time enjoy watching him bat as fans.

Australia and India are set to lock horns in a four-Test series with the opening day-night game in Adelaide starting December 17.

“I get asked a lot of questions about him, he’s just another player to me it doesn’t really bother me. There’s not really a relationship there with him to be fair, I see him at the toss and play against him and that’s about it,” Paine told ABC Sport.

“With Virat it is a funny one, we love to hate him but we also love to watch him bat as cricket fans. He certainly is polarising in that type of scenario. We love watching him bat, but we don’t like seeing him score too many runs.”

The last time the two sides met tempers flared with both skippers having a go at each other at every given opportunity. The duo even had to be separated by the on-field umpires on a couple of occasions.

“Australia and India, it’s a heated competition and he’s obviously a competitive person and so am I, so yeah there were a few occasions when we had words but that wasn’t because he was the captain and I was the captain, it could have been anyone,” Paine said.

Comparing his on-field battle with Kohli to the likes of Joe Root and Ben Stokes, the wicketkeeper-batsman said it is always a heated affair when the best players are out in the middle.

“There is always a bit more tension when a player is as good as he is, it’s the same when you play against England, it’s Joe Root or a Ben Stokes,” Paine said.

Last year, India had stunned Australia 2-1 to win their maiden Test series Down Under and Paine feels the rivalry between the two sides intensifies with every passing series.

“I’m looking forward to everything to be honest, it’s a huge series. They beat us here last time obviously with a different team, and as I said the rivalry between the two countries is building all the time…,” Paine said.

”… I think any time you get to test yourself against the best is something that you look forward to as players and as a team, and we certainly are.”

The hostilities escalated despite intense mediation efforts by Egyptian negotiators who held in-person talks with both sides. At least...
Read more
National

Court says it is a war-like situation in which treatment has to be afforded to all in need of it The State government on...
Read more
National

A cyclonic storm brewing over south-east Arabian Sea may bring light to moderate rain over many places of the State till May 16....
Read more

Jorginho howler hurts Chelsea as it loses to Arsenal; Milan goes on the rampage against Torino With the Spanish league title in sight, Atletico Madrid...
Read more

It remains to be seen how Powar works alongside Mithali. Former spinner Ramesh Powar on Thursday replaced WV Raman as the Indian women's...
Read more

India head the table after gaining one rating point for an aggregate of 121, having accumulated 2914 points from 24 matches India remained the...
Read more