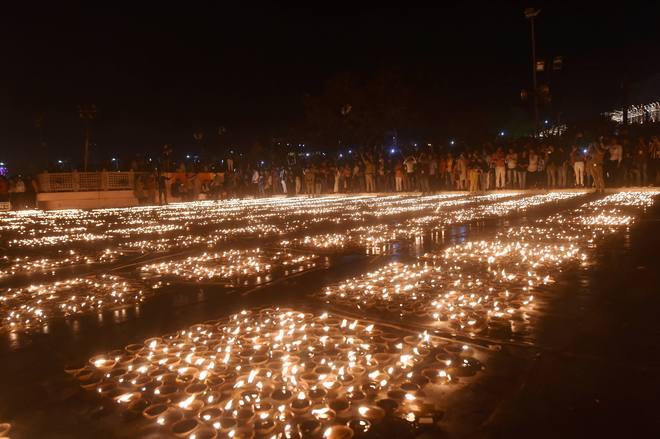 The Uttar Pradesh Government on Friday went all out in marking the homecoming of Lord Ram to this holy town – the mythical event in ‘treta yug’ on which the festival of Diwali is based. Along the way, the organisers broke a world record. As dusk fell, volunteers lit up over six lakh earthen lamps lined up on the Saryu riverbank.

A team from the Guinness World Records was present to see if it made it to their book. Hours later, team leader Nishchal Barot gave the final count as 6,06,569 ‘diyas’, saying it was “largest display of oil lamps” in the world.

An organiser said about 8,000 volunteers, drawn from a local college and NGOs, were involved in the feat.

The “Deepotsav” included the reenactment of the arrival of God Ram and Goddess Sita to Ayodhya on their ‘pushpak viman’, a laser and sound show and cultural programmes.

Actors representing the deities of Ram, Sita and Lakshman descended in a helicopter. The deities were received by Governor Anandiben Patel and CM Yogi Adityanath. — PTI

B.V. Srinivas, who hails from a non-political family in Bhadravati of Shivamogga district, is the first Kannadiga to occupy...
Read more
National

Counting of votes for the Greater Hyderabad (GHMC) polls will take place on Friday in what is seen as a three-way battle between the...
Read more
Trending

A case was registered on Thursday against 14 people under a recently introduced Uttar Pradesh law to punish forced religious conversions of women...
Read more