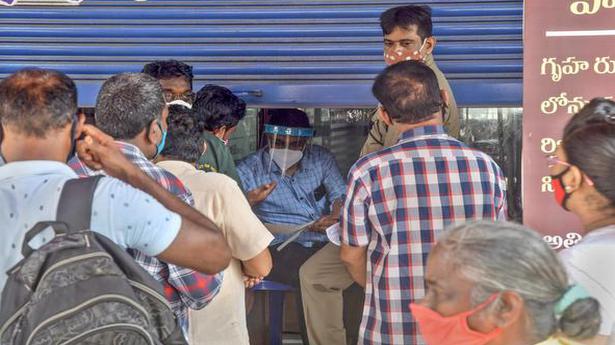 While banking is an essential service, the staff are not treated as frontline workers

Deaths due to COVID have sent ripples of fear among bank employees in the State. The staff of the nationalised and private banks are in a tizzy with positive cases and deaths being added to the list every day.

Forty-five- year-old Anand Kishore, a bank employee, is inconsolable as his close pal in the bank succumbed to COVID a couple of days ago. “There was not a single day at the chest (branches of selected banks authorised by the RBI to stock rupee notes and coins) that Suresh and I missed sharing our lunch boxes. It’s still unbelievable that Suresh is no more. I don’t like to open my lunch pack,” he says.

It is one of the 175-plus death cases in the State. The spike in positive cases and deaths, with banking being deemed an essential service, has raised concerns in the banking fraternity. More than 4,500 active cases is a worrying factor for the staff.

Andhra Bank Award Employees Union (ABAEU) State president M. Kishore Babu says, “So far and 175 of them died during the ‘second wave’ in the last month. Employees are in panic mode.”

United Forum of Bank Unions (UFBU) convener B.S. Rambabu point out that while banking was an essential service, bank employees were not treated as frontline workers. There was no rhyme and reason behind the rules and regulations by the managements. Though the business hours were from 9 a.m. to 12 noon, the employees were forced to remain in the branch till 4 p.m. Better cleanliness at the branches and more flexibility in work schedules were need of the hour, he says.

Mr. Kishore Babu says the employees were being asked to clock in extra hours despite the fact that deaths were on rise. The focus of banks should be, now, on getting the employees vaccinated. The government did not consider the requests despite their being frontline workers, he says.

The managements were demanding the employees to produce doctor certificate to go on sick leave. “We are being intimidated that disciplinary action would be taken if we insist on leave,” laments an employee.

There are no thermal scanners at the branches. Most of the branches have no security guard to control the visitors. Due to lack of space, it is very difficult to maintain physical distance.” he says.