UP Police on lookout for former MP in murder case, announce cash reward for his whereabouts 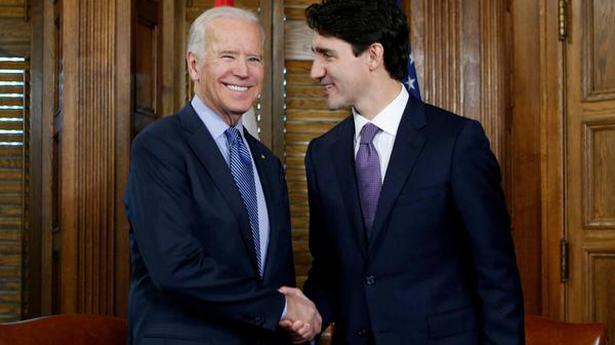 The U.S. and Canada are close allies, sharing the world’s longest land border and trading hundreds of billions of dollars worth of goods and services annually

U.S. President Joe Biden will host his first-ever virtual bilateral summit with Canadian Prime Minister Justin Trudeau on Tuesday during which they will jointly unveil a new initiative, a roadmap for partnership between the two neighbours.

The U.S. and Canada are close allies, sharing the world’s longest land border and trading hundreds of billions of dollars worth of goods and services annually.

“Today President Biden will jointly unveil a new initiative with our Canadian partners and friends: The U.S.-Canada Partnership Roadmap,” the White House said on Monday.

According to the White House, the roadmap is a blueprint for the whole-of-government relationship, based on their shared values and commitment to work in partnership on areas of mutual concern, such as the recovery from COVID-19 and global health security, efforts to combat climate change and shared priorities in defence and security.

“Through the Roadmap, we will also advance our shared vision of prosperity, diversity, equity, and justice for all our citizens,” the White House said ahead of the summit.

During the meeting, Biden will outline the Roadmap, which will prioritise combating COVID-19, accelerating climate ambitions, advancing diversity and inclusion, bolstering security and defence and building global alliances.

Mr. Biden and Mr. Trudeau will affirm their shared commitment to addressing global challenges through the Roadmap through multilateral institutions, including the United Nations, G7 and G20, the WTO, NATO and the Five Eyes community.

Finally, the leaders will agree to work towards reviving the North American Leaders’ Summit as a recommitment of solidarity among the United States, Canada and Mexico, the White House said.

According to a senior administration official, the two leaders are trying to recreate the substance, depth and breadth of the bilateral relationship in virtual space.

The virtual meeting would include a one-on-one meeting between the two leaders, followed by an expanded one with Cabinet members and senior officials from the two sides joining them.

“The biggest deliverable from the meeting is going to be essentially not a joint statement that’s going to reside on a website, but rather a roadmap to reinvigorate US-Canada collaboration. It is essentially tasking our Cabinet and ministers on everything from COVID-19, to the economy and economic cooperation to an ambitious partnership on climate, cooperation with Canada to build global alliances…,” said the official.

Each political party has its own system for winnowing the nominees from a large field of aspirants Election time usually...
Read more
National

While condemning the news in a section of media that the YSR Congress Party has been threatening candidates to withdraw in civic polls, Adviser,...
Read more
National

Kherki Daula toll plaza to be removed before August 2022: Gadkari

Painting competition for students of classes 3 to 12

The Income Tax Department said on Thursday that its search and survey operations on two leading film production companies, a leading actress, and two...
Read more

The home, which was originally built in 1874 and designated a city landmark in 1998, was officially listed on the federal register last month,...
Read more

At least seven members of Afghanistan’s persecuted Hazara ethnic group were brutally murdered in the country’s restive east, officials said on Thursday, in the...
Read more

The suspect in the stabbing that left eight people injured in Sweden is a 22-year-old Afghan, who arrived in the Nordic country in 2018,...
Read more
Bharat News