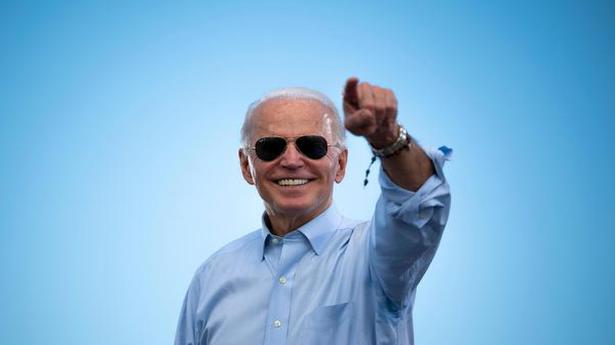 The President-elect, who will take office on Jan. 20, offered an optimistic assessment of the next four years during a meeting with several business and labour leaders

Acknowledging that the nation is in a “dark” place, President-elect Joe Biden on Monday said his administration would strengthen the country’s vulnerable economy despite the exploding pandemic as he pushed forward with the business of preparing to assume the presidency.

Mr. Biden , who will take office on Jan. 20, offered an optimistic assessment of the next four years during a meeting with several business and labour leaders ahead of an afternoon economic address from his makeshift headquarters in Delaware.

“To state the obvious, we seem to be turning a pretty dark corner now,” Mr. Biden told the group, their faces projected on video screens, as the meeting began.

“I don’t want to be falsely optimistic,” he continued. But “I think we can do this.”

Mr. Biden , a Democrat, has vowed to spend trillions of dollars to reinvigorate U.S. manufacturing, expand health care coverage and combat climate change, among other priorities. But his chief priority remains controlling the coronavirus pandemic, which is surging to record levels and forcing state and local leaders to implement new rounds of restrictions on local businesses.

The President-elect has so far tried to sidestep difficult questions about whether he might support a short-term national lockdown to arrest the surge of coronavirus cases. Since defeating Trump, Mr. Biden has devoted most of his public remarks to encouraging Americans to wear masks and embrace social distancing measures.

But members of his coronavirus advisory board have been more specific. One member, Dr. Michael Osterholm, recently suggested a four- to six-week national lockdown with financial aid for Americans whose livelihoods would be affected. He later walked back the remarks and was rebutted by two other members of the panel who said a widespread lockdown shouldn’t be under consideration.

Speaking Monday on “CBS This Morning,” Osterholm was not asked about a potential lockdown, but he said the nation needs “a standard set of principles.”

Recent reports suggest that at least two vaccines are close to winning approval, though mass distribution is likely several months away.

Mr. Trump seemed to acknowledge Mr. Biden ’s victory for the first time on Sunday before walking back the remark and repeating false claims of widespread voter fraud. Despite mounting public pressure, the Trump administration has refused to initiate the traditional transition briefings for the incoming president’s team on national security and policy issues.

Mr. Trump is also blocking Mr. Biden ’s team from being briefed on efforts to control the pandemic and distribute prospective vaccines.

“We now have the possibility … of a vaccine starting perhaps in December or January,” Mr. Biden ’s chief of staff, Ron Klain, said Sunday. “There are people at HHS making plans to implement that vaccine. Our experts need to talk to those people as soon as possible so nothing drops in this change of power we’re going to have on Jan. 20.”

Mr. Biden and Harris were speaking at a particularly tricky time for economic policy.

The U.S. economy has recovered from the pandemic-induced shutdowns this spring more quickly than most economists expected. The unemployment rate dropped a full percentage point last month to 6.9% and those who still have jobs – many of them working from home – have stepped up their spending on cars, electronics and home renovations.

But much of the rebound was fueled by $2 trillion in stimulus money that has largely run its course. And there are signs that the ongoing increases in confirmed virus cases are making Americans more cautious about traveling and shopping.

Consumers cut back on spending in early November, according to JPMorgan Chase, which tracks spending on 30 million of its debit and credit cards. Spending declines have been larger in some states with severe outbreaks, such as Iowa and North Dakota.

Most economists support another round of stimulus funding, including loans to small businesses, extended unemployment benefits and support for states and cities. Congressional Democrats have previously backed another $2 trillion in aid.

Sen. Mitch McConnell, the Republican majority leader, has pointed to the falling unemployment rate as evidence that much less stimulus is needed.

The number of “excess deaths” registered by the Civil Registration System (CRS) in Karnataka ever since the COVID-19 pandemic...
Read more
Entertainment

Lucky is a simple man who, like many others, had a rough childhood so he wants to make up for everything in the shortest...
Read more
Trending

PM Modi noted that the medical science focuses as much on “healing” as on treatment, and said yoga plays a role in healing. Prime...
Read more
World

Peace talks in Qatar between the Afghan government and the Taliban have not made significant progress. U.S. President Joe Biden will meet Afghanistan’s President Ashraf...
Read more
- Advertisement -

As U.S. troops leave Afghanistan, Joe Biden to meet with Ghani and Abdullah in Washington

Peace talks in Qatar between the Afghan government and the Taliban have not made significant progress. U.S. President Joe Biden will meet Afghanistan’s President Ashraf...
Read more

The early election was called by Nikol Pashinyan in a bid to ease public anger over the peace deal he signed as Prime Minister...
Read more

At least 18 killed in violence near U.S.-Mexico border

Reynosa is a key crossing point for migrants attempting to reach the United States Gunmen in vehicles opened fire in the Mexican city of...
Read more

Suspect arraigned in killing of American student in Russia

A court in central Russia on June 20 arraigned a suspect on murder charges in the death of an American woman who was...
Read more
- Advertisement -