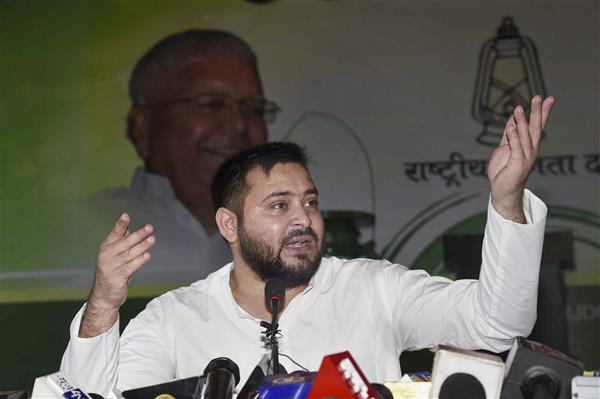 Bihar’s main Opposition RJD and its allies on Wednesday attacked Chief Minister Nitish Kumar for appointing Mewalal Choudhary of JD(U) as the Education Minister even though he faces corruption charges and was suspended from the party over the issue, and demanded he be sacked.

RJD leader Tejashwi Yadav said Choudhary, a former Vice Chancellor of an agriculture university and a first-time minister, faces serious charges under the Indian Penal Code, including cheating and dishonesty (section 420), and criminal conspiracy (120B).

“Has Chief Minister Nitish Kumar awarded Mewalal Choudhary for corruption and given him the freedom to loot?” Tejashwi asked in a tweet.

Choudhary, 67, was suspended from the Nitish Kumar-led JD(U) in 2017 after an FIR was registered against him over alleged irregularities in appointments during his tenure as the Vice Chancellor of the Bihar Agriculture University, Sabour, in Bhagalpur district.

The FIR was registered against Choudhary in February 2017 on the basis of a report by the then VC over some anomalies in the appointment of Assistant Professors and junior scientists.

BJP which was in the opposition during the Grand Alliance government then had strongly raised the issue against Choudhary.

Choudhary had left the job to contest the 2015 Bihar polls on a JD(U) ticket and was elected from Tarapur Assembly seat in Munger district. He retained his seat in the just- concluded state polls and has been made the Education Minister.

The probe has brought to light alleged irregularities in the appointment of 161 Assistant Professors and Junior Scientists in 2012.

Tejashwi also took a swipe at the new NDA government for not appointing any Muslim in the cabinet.

They have made an accused, absconding in several cases of corruption, the Education Minister, but there is no minister from the minority community, said Tejashwi.

RJD chief Lalu Prasad, who is jailed in fodder scam cases, tweeted that while his son Tejashwi was committed to signing 10 lakh jobs in his first cabinet meeting, if he was voted to power, Nitish made his priorities clear by inducting into his cabinet a person who is facing charges of corruption.

“Look at the irony, the BJP which was attacking the JD(U) over Mewalal until now, is silent today,” Prasad tweeted in Hindi.

While he is in jail, Prasad’s Twitter handle is operated by his office in consultation with his family.

CPI-ML state secretary Kunal said his party, which has 12 MLAs, would protest against Choudhary from the Day 1 of the new Assembly session, which is on November 23.

“We want Nitish Kumar to sack him (Choudhary),” he said.

Kunal said Choudhary’s appointment as the Education Minister “is an insult to the people of Bihar”.

Taking a dig at the Chief Minister over his oft-repeated assertions that he would not tolerate three Cs – crime, communalism and corruption – Kunal said, “You keep talking about the three Cs, then what is this? You yourself had suspended him. The case against him is still going on. And you have made a corrupt man the Education Minister.”

“We are requesting other Mahagathbandhan allies to join our protest. Our student wings will also protest against him,” said Kunal.

“By making somebody like Mewalal Choudhary the Education Minister, Chief Minister @NitishKumar himself has tarnished his image and hurt his political reputation,” Mishra tweeted with the hashtag ‘Sack Mewalal’ in Hindi.

While the minister was not available for comment, his personal assistant Abhishek Kumar said only courts would decide if Choudhary was guilty.

“The minister has to say that the courts are supreme,” said Abhishek. “And if there is any case, only the court can decide whether somebody is guilty or not. There is no need to say anything when the case is sub-judice.”

Asked if the JD(U) suspending Chouhary was an admission of guilt, Abhishek said, “This is the party’s rule that if you face any allegations, you are asked to (leave) for some time.” PTI