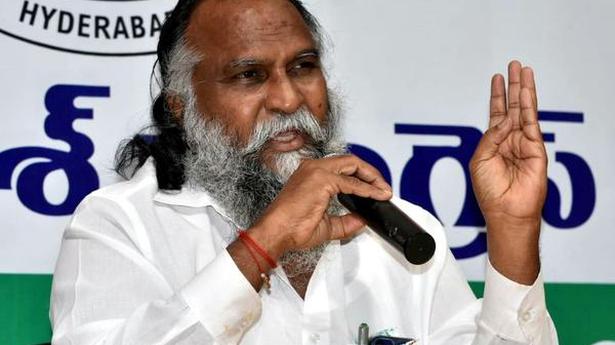 Why is State Task Force on COVID silent on over-billing by private hospitals, asks Congress MLA

Sangareddy MLA T. Jayaprakash Reddy has challenged the BJP Parliament members from the State to fight with their Central leadership on the short supply of vaccines and Remdesvir injections rather than making tall claims.

At a press conference here, he said that Remdesvir injections were not available even in the black market if people want to spend money. It is unfortunate that the injections are manufactured in Hyderabad but the city doesn’t get its share, he said alleging that the Centre was providing sufficient numbers only to a few states.

Mr. Reddy threatened that he would be forced to stage a dharna in front of the manufacturing unit in Telangana if sufficient numbers were not given to the State on priority basis. He asked as to why the State government was not protesting with the Centre when hundreds of people were dying due to the shortage of medicines.

The Congress MLA ridiculed the BJP leaders claim that the State government was not providing sufficient data and said it can get the data from its own sources if it wants to. The responsibility lies with the Centre for providing vaccines and the injections, he said.

Mr. Reddy also questioned the silence of the State Task Force on COVID when private hospitals were openly fleecing patients and billing them lakhs of rupees. There are so many reports of victims of high billing but the Task Force is just silent. He said Minister Srinivas Yadav should visit the hospitals before claiming that coronavirus spread was under control in Telangana.