Befitting reply if anyone hurts our pride: Rajnath 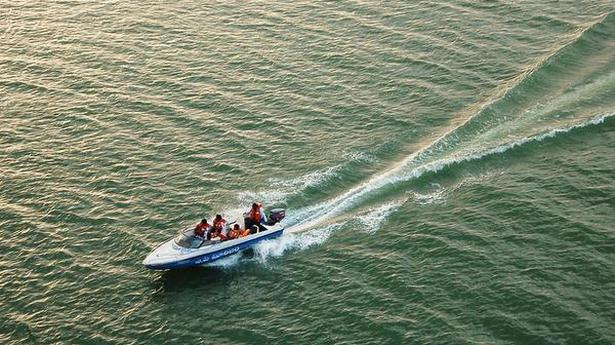 Here is good news for the tourists. The government has given permission for operating boats to various tourist destinations across the State.

More than 150 boats will offer services during the ‘Kartika Maasam’, which begins on Monday.

Air-conditioned and non-AC boats, pedal boats, and house boats will be operated in the Bay of Bengal, and the rivers and water bodies in Krishna, West and East Godavari, Visakhapatnam, Nellore and other places.

The Port, Irrigation, Revenue, and Police departments and the Andhra Pradesh Tourism Development Corporation (APTDC) have made foolproof security arrangements for safe water transport. Nine control rooms have been set up along the water bodies to monitor the boating operations.

The government had suspended boating after the tragedy at Kachluru, near Devipatnam, on September 15 last. In all, 51 tourists, who included a few children and women, from Telangana, A.P., Tamil Nadu, Karnataka and other States died when the private boat – Royal Vasista Punnami – capsized in the Godavari. The local tribal people could rescue 26 people.

Boating had resumed at select places (12-seater boats) in the State in January this year. However, all the tourist places were closed due to the pandemic.

Speaking to The Hindu on Sunday, APTDC General Manager (water fleet) Ch. Pavan Kumar said about 170 boats, including 50 owned by the corporation, would resume operations in the sea, reservoirs, rivers and other water bodies soon.

The Maritime Board (Port Department) would issue the boat fitness certificate and the Irrigation department would give the route permit. The APTDC would issue the ‘no objection certificate’ (NOC) for the boats. Staff at the Integrated Boating Control Rooms would check the licence, fitness, capacity and other aspects at each point, he aid.

West Godavari Superintendent of Police K. Narayan Naik said drivers should be certified by the National Institution of Water Sports (NIWS), and the staff and tourists should follow all safety norms.

“About 60 private boats have applied for permission for operating from Rajamahendravaram, Pattiseema, Pochamma Gandi (temple), Polavaram and Singanapalli to Papikondalu. Two APTDC boats will be operated in the Godavari on the same route, where the demand during ‘Kartika maasam’ will be high,” he added.

“Priority will be given for safety and the tourists, boat owners and staff are appealed to follow safety norms and not to carry inflammable material,,” Mr. Suryanarayana said.

Morning Digest: PM Modi to launch COVID-19 vaccination drive on Jan. 16; farmers to attend 9th round of talks with govt without ‘much hope’,...

“WandaVision will be unlike anything we’ve done before,” Marvel Studios chief Kevin Feige had told CNN in 2019. A tall claim to make in...
Read more
Trending

Befitting reply if anyone hurts our pride: Rajnath

Morning Digest: PM Modi to launch COVID-19 vaccination drive on Jan. 16; farmers to attend 9th round of talks with govt without ‘much hope’,...

India and Oman on January 14 reviewed the entire spectrum of their relationship and vowed to regain momentum in trade and investment linkages...
Read more
Bharat News