UP govt to give allowance to those affected by curfew 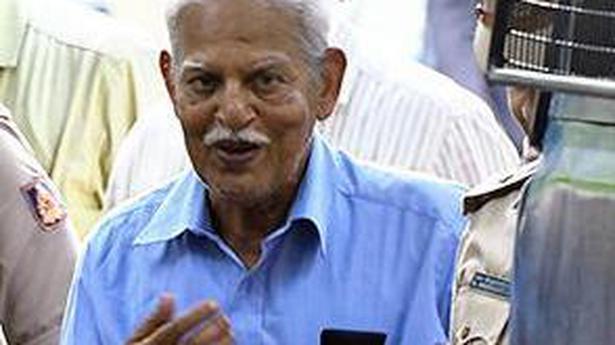 Team of doctors from Nanavati hospital to report on condition of detained poet.

The Bombay High Court on Wednesday ordered that a video examination of the medical condition of 81-year-old poet Varavara Rao, currently lodged at Taloja Central Jail, be conducted by a team of doctors of Nanavati hospital.

A division Bench of justices A.K. Menon and S.P. Tavade said if the team of doctors are of the view that video examination is not possible then they should visit Taloja Jail at the earliest to ascertain his medical condition and submit the report on or before November 16. The Bench also said the team of doctors must be the same ones who have seen Mr. Rao before. The hearing was adjourned till November 17.

The Bench was hearing a petition filed by Mr. Rao’s wife P. Hemlata through senior advocate Indira Jaisingh. As an urgent interim relief she sought that a medical examination be conducted to recommend the line of treatment and also urged that Mr. Rao be shifted from Taloja jail to Nanavati Hospital.

Ms. Jaisingh told the court that Mr. Rao has dementia, is bedridden and kept in diapers due to incontinence. His catheters are not changed because of which he has developed urinary tract infection, Ms. Jaisingh said, adding that conditions of his detention are “cruel, inhuman and degrading.”

The petition argued that there is a legitimate concern that the Telugu poet may lose his life and it will be a custodial death. She sought for an independent board of doctors from Nanavati Hospital to examine his health as he was previously admitted there and the hospital was chosen by the National Investigation Agency (NIA).

Ms. Jaisingh relied on an affidavit filed by the NIA stating that Mr Rao cannot be given bail as he is a terrorist and is charged under Unlawful Activities Prevention Act.

The court asked Additional Solicitor General Anil Singh representing the NIA, “What is the harm if a board of doctors from Nanavati Hospital conducts medical tests on Mr. Rao? A panel of doctors needs to decide on the tests that he can withstand given his medical condition.. then they can decide on whether he needs to be shifted to Nanavati Hospital.”

Government counsel Deepak Thakare said a recent medical report on November 2 says urine cultural tests were conducted and all reports are “normal”. After perusing the report, the court said, “Who has done the tests.. the name of the doctor is not mentioned.”

The court went to say, “We don’t want to have a knee jerk reaction and shift him out of prison hospital but how much can be assessed through video?”

To which Mr. Singh interrupted and said, “Let doctors examine him on video. We have doctors in jail and government hospitals. Can’t let prisoners choose their doctors, it will set a wrong precedent.”

The court then said, “It is about a prisoner’s health. Let video examination be conducted today or at the earliest by a team of Nanavati doctors and let them file a report at the earliest.”

Tauktae, which has intensified into a Very Severe Cyclonic Storm, has moved further north in the Arabian Sea. Kerala is likely to receive isolated...
Read more
Entertainment

Salman Khan on those pirating Radhe: ‘You will get into a...

Salman Khan has warned those who are pirating his latest film Radhe: Your Most Wanted Bhai by saying that the Cyber Cell will take...
Read more
National

Minister for Women and Child Development Smriti Irani took to Twitter to flag adoption requests as illegal and urged people to prevent trafficking in...
Read more

Tauktae, which has intensified into a Very Severe Cyclonic Storm, has moved further north in the Arabian Sea. Kerala is likely to receive isolated...
Read more

Minister for Women and Child Development Smriti Irani took to Twitter to flag adoption requests as illegal and urged people to prevent trafficking in...
Read more

Karnataka has moved ahead of Maharashtra with 41,664 infections. Maharashtra reported 34,848 cases, followed by Tamil Nadu (33,658). However, Maharashtra recorded the most casualties...
Read more

Manipur doctor dies due to COVID-19

Official reports say that some other doctors and nurses in the Jawaharlal Nehru Institute of Medical Sciences, Imphal, had contracted the infection and reportedly...
Read more
Bharat News