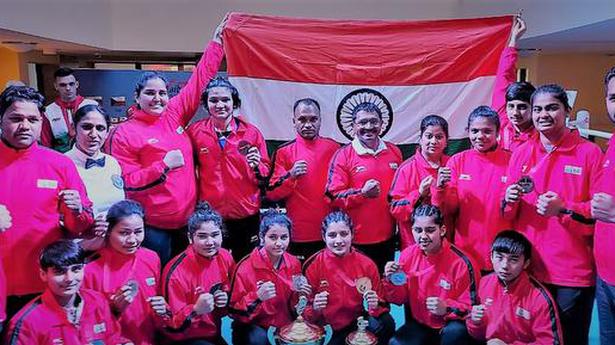 Babyrojisana, who trains at M.C. Mary Kom’s academy, got the better of Asian junior champion Sabina Bobokulova of Uzbekistan 3-2.

Lucky suffered a 5-0 defeat at the hands of Finnish boxer Lia Pukkila to claim silver. With two medals in the men’s category, the 19-member Indian team concluded its campaign in an overall second position (12 medals).

Uzbekistan and Ukraine claimed first and third position respectively in the overall standings.

The sedition charges stem from an anti-government rally in September, though details on the alleged offences were not immediately...
Read more
Entertainment

Non-fungible tokens, a type of crypto-asset, is becoming popular as several investors and enthusiasts are showing eagerness in spending large sums of money on...
Read more
Trending

A new documentary follows the former Australian captain’s journey as he captures the country’s obsession with the sport Two decades ago, if you had to...
Read more

The 58-year-old will return after holding off competition from Victor Font and Toni Freixa Joan Laporta returned as Barcelona FC president on Sunday after winning...
Read more

A one-two between Karim Benzema and Casemiro led to the former scoring and Real nicking a point off Atletico in the Madrid derby in...
Read more