Boxing | Vijender Singh set for return to ring next month, opponent to be announced soon

SC notice to FRL, others on Amazon plea against HC direction for status quo on Future-Reliance deal 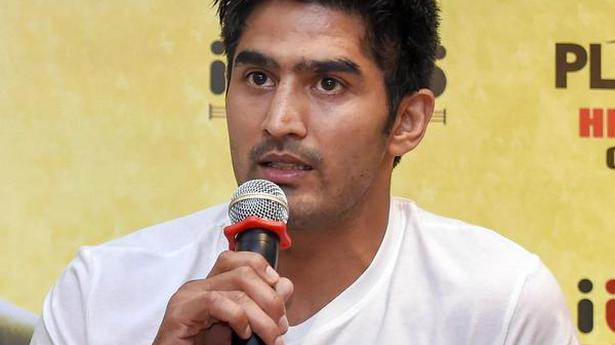 This will be Vijender’s fifth fight in India, following successes in New Delhi, Mumbai and Jaipur

Unbeaten Indian professional boxing star Vijender Singh will be back in action next month after more than a year long hiatus forced by COVID-19, his promoters announced on February 22, promising to unveil his opponent soon.

The fight will take place in India but the venue will be revealed later.

“While the promoters finalise on the opponent, date and venue, Vijender Singh will certainly be in action this March with an aim to extend his unbeaten streak 12-0 [8 knockout wins] in professional boxing,” his promoters IOS Boxing Promotions said in a statement.

“A group of young and talented boxers will also go head-to-head as undercards for the fight.” Vijender, the reigning WBO Oriental and WBO Asia Pacific Super Middleweight champion defeated Ghana’s former Commonwealth Champion Charles Adamu in Dubai to claim his 12th successive win in November 2019. He has not competed ever since.

This will be Vijender’s fifth fight in India, following successes in New Delhi, Mumbai and Jaipur.

The Indian is undergoing rigorous training for the past one month and is raring to go. “I am really excited to return to the ring. I am pumped up and eager as ever to enter the ring again and have been training hard to keep myself fit for the bout. The opponent doesn’t really matter as I am focused to extend my unbeaten streak,” he said.

IOS Promotions’ Neerav Tomar said, “The COVID-19 pandemic gave us ample time to invest our thoughts on doing something different this time and increasing the level of professional boxing in India.

“We hope all the fans watching or present at the venue will thoroughly enjoy the event.”

Director Sooraj Barjatya turned a year older today; he is 55 now. And it seemed like the right occasion to watch his legacy-defining blockbuster,...
Read more
National

Delhi now not too distant from Dispur, he says after launching a slew of projects worth over ₹3,300 crore. Accusing the governments that ruled...
Read more
Sport

Boxing | Vijender Singh set for return to ring next month,...

City has 13 straight wins in the premier league and looks unstoppable with 13 games left in its campaign. Exactly three months ago,...
Read more

Racing Team India’s dream of securing an invitation to the 24 Hours of Le Mans ended with a fifth place finish in the overall...
Read more
Bharat News