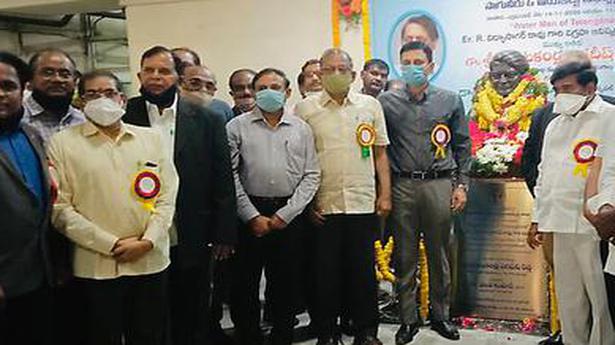 The role of late irrigation engineer R. Vidyasagar Rao in educating people during the movement for statehood to Telangana on the grave injustice done to the region in sharing of river waters was invaluable, Minister for Energy G. Jagadish Reddy said on Saturday.

Speaking after unveiling the busts of the expert on irrigation and water issues on the premises of Jala Soudha, the head office of Irrigation Department, and Engineers Bhavan, both in Errum Manzil, the Minister said Vidyasagar Rao kept highlighting the injustice done to Telangana in the matter of river waters all through his life on any given opportunity. The busts were unveiled commemorating the late engineer on his birthday, November 14, which the State Government had declared and has been officially celebrating as Telangana Irrigation Day.

It was due to his detailed explanation of how the due share of water was being denied to Telangana both in the Krishna and Godavari rivers during the combined Andhra Pradesh dispensation, the issue had struck cord with people during the movement. It was he who educated the commoners that there would be account for water too and how it would be measured while in flow and in storage facility (reservoir), Mr. Jagadish Reddy said. Numbers related to flows and volume were on his finger tips and he would reel out figures of water denied to Telangana in the two major river basins by-heart. Late Vidaysagar Rao stood by Chief Minister K. Chandrasekhar Rao, first as a strong ideologue of Telangana during the statehood movement, and later as Advisor to Government on Irrigation.

The rupee snapped its three-session winning streak and settled for the day 3 paise lower at 73.07 (provisional) against the American currency...
Read more
World

Night curfew to continue for 15 more days in four Gujarat...

“Your questions are completely wrong and inappropriate,” he tells mediapersons Bihar Chief Minister Nitish Kumar lost his cool on Friday and lashed at out at...
Read more

Election Commission nod to use its data for COVID vaccination drive; wants data to be deleted after exercise is over

According to guidelines for the COVID-19 vaccination drive, the latest electoral roll for Lok Sabha and assembly elections will be used to identify the...
Read more
Bharat News