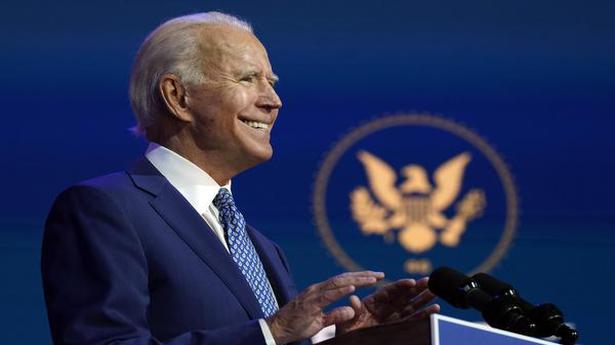 President-elect of the U.S. Joe Biden spoke to fellow heads of government and state of four European countries on Tuesday, as per a press release from his presidential transition team. Congratulatory calls are customary after an election victory but they are especially significant this year as Mr. Biden has said he will renew transatlantic relationships, which have frayed under current U.S. President Donald Trump.

On a call with French President Emmanuel Macron, Mr. Biden discussed “ his interest in reinvigorating bilateral and transatlantic ties, including through the NATO and the EU.”

Also discussed were COVID-19 and a sustainable economic recovery, Iran’s nuclear programme, climate change and human rights. Mr. Biden had said earlier that as President he would offer Iran “a credible path back to diplomacy” — potentially helping to re-instate the Joint Comprehensive Plan of Action (which collapsed after the U.S. withdrew from it). He has also said he will rejoin the Paris accord.

Mr. Biden also discussed the conflicts in Ukraine and Syria with Mr. Macron, as per the press release.

The President-elect also spoke with German Chancellor Angela Merkel and “praised her leadership” as per the readout of the call.

Mr. Biden “ also welcomed the opportunity to cooperate on a shared agenda with the EU.”

Mr. Trump’s relationship with Ms. Merkel was tense — the two were at loggerheads over tariffs, the NATO and their different approaches to immigration.

This had been a point of discussion when British Foreign Secretary Dominic Raab visited the U.S. in September.

“We can’t allow the Good Friday Agreement that brought peace to Northern Ireland to become a casualty of Brexit,” Mr. Biden said at the time. “Any trade deal between the U.S. and U.K. must be contingent upon respect for the Agreement and preventing the return of a hard border. Period.”

“The President-elect [Biden] noted [ on his call with Mr. Johnson] that he especially looks forward to working closely together on global challenges as the United Kingdom prepares to host the 2021 G-7 and the UN Climate Change Conference (COP26),” the press release said.

Several world leaders, including Prime Minister Narendra Modi, have congratulated Mr. Biden for his electoral victory since Saturday. Mr. Trump has made unsubstantiated claims of large scale electoral fraud and has not conceded the election. The New York Times reported that some American embassy officials have been told not to help with calls between foreign leaders and Mr. Biden.

The U.S. donation also signals its support for Taiwan in the face of growing pressure from China, which claims the self-governing island off its...
Read more
National

Congress chief spokesperson Randeep Surjewala, however, did not say whether the party will participate in the June 24 meeting or not. Ahead of a...
Read more
Trending

On June 13, 49-year-old Naftali Bennett was sworn in as the new Prime Minister of Israel. He is the leader of Yamina, a right-wing...
Read more

A number of Chinese yoga teachers from Yogi Yoga school headed by its founder Mohan Bhandari took part in the over an hour-long yoga...
Read more
- Advertisement -