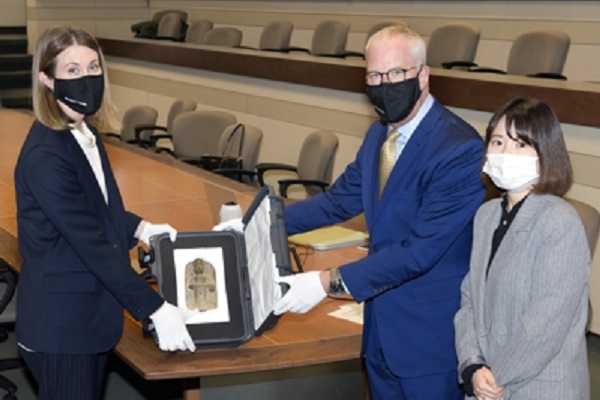 A Canadian university will soon return to India a unique statue of Hindu goddess Annapoorna that was stolen from a shrine in Varanasi over a century ago and found its way to the varsity’s art gallery, in an attempt to “right historical wrongs” and help overcome the “damaging legacy of colonialism”.

The statue is part of the University of Regina’s collection at the MacKenzie Art Gallery. The statue was part of the original 1936 bequest by Norman MacKenzie, the gallery’s namesake.

Artist Divya Mehra brought attention to the fact that the statue had been wrongfully taken over a century ago while going through MacKenzie’s permanent collection and preparing for her exhibition, the university said in a statement on Thursday.

“We are delighted that this unique statue of Annapoorna is on her way home. I am grateful to the University of Regina for their proactive engagement for the return of this cultural icon to India,” Bisaria said.

“The move to voluntarily repatriate such cultural treasures shows the maturity and depth of India-Canada relations,” he said.

When Mehra researched the story behind the statue, she found that MacKenzie had noticed the statue while on a trip to India in 1913. A stranger had overheard MacKenzie’s desire to have the statue and stole it for him from its original location — a shrine at stone steps on the riverbank of the Ganges at Varanasi, India, the varsity said.

She holds a bowl of kheer (rice pudding) in one hand and a spoon in the other. These are items associated with Annapoorna, who is the goddess of food and the queen of the city of Varanasi. She is celebrated by her devotees as one who nourishes and strengthens the body through food, and the soul through enlightenment, the statement said.

“The repatriation of the Annapoorna is part of a global, long-overdue conversation in which museums seek to address harmful and continuing imperial legacies built into, sometimes, the very foundations of their collections. As stewards of cultural heritage, our responsibility to act respectfully and ethically is fundamental, as is the willingness to look critically at our own institutional histories,” said Alex King, Curator/Preparator, University of Regina President’s Art Collection.

When the current administration at the university and the MacKenzie Art Gallery were alerted to the documentation which revealed the statue as an object of culture theft, both institutions committed to taking appropriate action, the varsity said.

“As a university, we have a responsibility to right historical wrongs and help overcome the damaging legacy of colonialism wherever possible,” said Chase.

“Repatriating this statue does not atone for the wrong that was done a century ago, but it is an appropriate and important act today. I am thankful to the MacKenzie Art Gallery, the Indian High Commission, and the Department of Canadian Heritage for their roles in making it possible,” the Vice-Chancellor said. PTI

There is this nice feeling that you get when you buy a new vehicle. While for some it could be something that they are...
Read more

New Delhi, April 17 : The Defence Research and Development Organisation (DRDO) has decided to reopen a medical facility near the Delhi airport to treat...
Read more