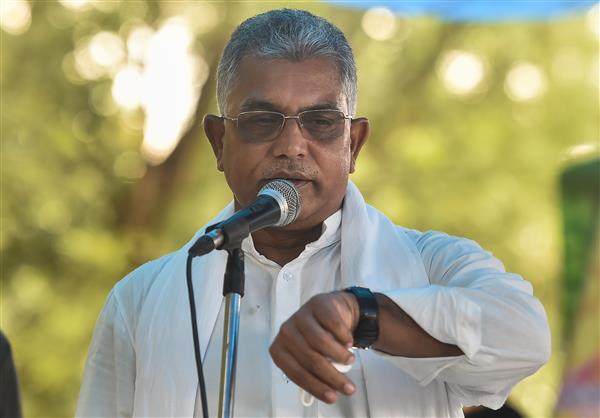 West Bengal BJP president Dilip Ghosh on Wednesday alleged that saffron party workers on their way to attend a rally in Birbhum district were attacked by Trinamool Congress activists, and asked his partymen to carry bamboo sticks while coming out on the street to “strike back when needed”.

Addressing the rally here, Ghosh also claimed that many TMC leaders would be in jail after the BJP comes to power in the state.

“Our party workers who were coming to attend the meeting were attacked by the Trinamool Congress. BJP activists are not born to get beaten. I urge the party workers not to come out on the streets empty-handed. Carry a bamboo stick to strike back when needed,” he said.

A clash broke out between activists of the two parties at Simulia in Birbhum district after BJP men going to the rally in a minibus had an altercation with local TMC workers.

Exhorting BJP workers to fight for a few more months, he said, “The BJP has a history of struggle for which the party has reached to this position now.”

The Assembly election in the state is due in April-May next year.

“Many bomb manufacturing units were unearthed and terrorists were arrested from Birbhum district. The situation here now is the same as used to be in Kashmir,” said Ghosh.

The Medinipur MP said that a change of guard was needed in the state in 2021 failing which people would find it difficult to stay in West Bengal.

Ghosh claimed that if the BJP came to power in West Bengal, people would be able to stay peacefully like in other states governed by the party.

“In 2021, change has to come in the state. On that day, the Trinamool Congress workers who are now inflicting torture on people will not find any way to escape. If there is no change, then torture by the TMC will reach such heights that people will not be able to stay here,” he said.

Claiming that the state police will not be allowed to go near the polling booths which will be manned by personnel of central forces, the BJP’s West Bengal chief said that people would be able to cast their own votes this time.

Ghosh alleged that funds sent by the Centre did not reach the hands of the people and were looted by Trinamool Congress leaders. PTI

Although flights from Argentina, Chile and South Africa will not be suspended, all arrivals from those countries will have to submit to the quarantine...
Read more
Sport

There is this nice feeling that you get when you buy a new vehicle. While for some it could be something that they are...
Read more

New Delhi, April 17 : The Defence Research and Development Organisation (DRDO) has decided to reopen a medical facility near the Delhi airport to treat...
Read more