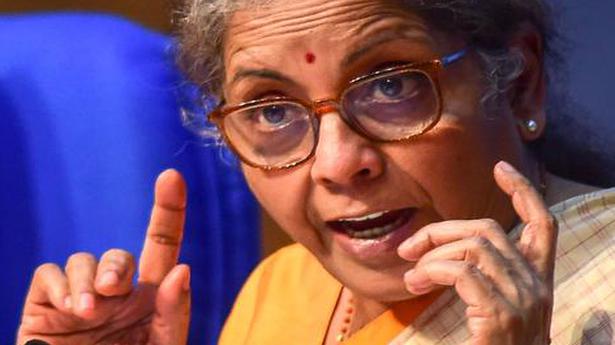 Finance Minister Nirmala Sitharaman on Thursday announced a fresh set of relief and stimulus measures for the economy worth ₹ 1.19 lakh crore, including a scheme to boost re-employment chances of formal sector employees who lost their jobs amidst the COVID-19 pandemic.

The measures, announced a day after the Reserve Bank of India (RBI) said the country had entered into a technical recession in the first half of 2020-21, including a ₹ 65,000 crore additional outlay for providing fertilizer subsidies to farmers.

Ms. Sitharaman asserted that the economy’s rebound as per recent indicators is not just driven by pent-up demand but marked strong economic growth.

“The RBI’s latest monthly report predicts a strong return to proper growth for the economy, and there could be strong growth in the third quarter itself that could bring us to positive terrain. The expectation earlier was that growth would be seen in the fourth quarter, but the RBI feels it could happen as early as Q3, ”the minister said, adding that even ratings agency Moody’s Investor Service had revised its GDP projects for India upwards.

“Even these assessments by agencies referring to a correction is happening in the positive direction,” she said, before unveiling 12 measures that she said may be referred to as Atma Nirbhar Bharat Abhiyan 3.0.

Also read | Retail inflation inches up to 7.61% in October

The measures included the production-linked incentive scheme for 10 sectors with proposed proposed of ₹ 1.46 lakh crore over five years, announced on Wednesday. The other measures add up to a proposed outgo of ₹ 1,19,100 crore. Experts pegged the fiscal cost of Thursday’s announcement at about 1.2% of GDP, if the PLI scheme was included.

Ms. Sitharaman allocated ₹ 900 crore for research and development towards the COVID-19 vaccine and said the government was ready to provide for the actual cost of the vaccine and the logistics for its distribution. “Whatever is required for that (the vaccine cost and distribution logistics), as and when it is required, will be provided,” she said.

To spur rural employment, an additional ₹ 10,000 crore has been provided for spending through the MGNREGS and PM’s rural roads scheme. Effectively, this takes the total allocations for MGNREGA in the year close to ₹ 1.1 lakh crore, with Ms. Sitharaman stating that ₹ 73,504 crore had already been spent to generate 251 crore person days of employment.

To boost formal sector employment, a new Atmanirbhar Rozgar Yojana has been launched, under which the government will bear the entire employees’ provident fund (EPF) contributions for two years of all new employees hired between October 1, 2020 and June 30, 2021, in firms with less than 1,000 employees.

The definition of ‘new employee’ has been kept flexible to include anyone who was part of the EPF net earlier, but had lost their job between March 1 and September 30, 2020. This may help improve such workers’ re-employment prospects.

As per the Finance Ministry, this benefit will apply to all such ‘new employees’ earning monthly wages less than ₹ 15,000. For firms with more than 1,000 employees, the center will bear half of the EPF contributions (24% of wages), while for smaller firms, it will bear the entire EPF contribution.

“This benefit will get credited upfront in Aadhaar-seeded EPF accounts of eligible new employees. This will cover nearly 99.1% of all installations and an estimated 65% of all those employed under the formal sector will be covered by this benefit, ”the minister said.

To boost urban housing and create jobs, an additional allocation of ₹ 18,000 crore has been made for the PM Awaas Yojana over and above the ₹ 8,000 crore allotted in the budget. Ms. Sitharaman said as many as 78 lakh additional jobs are expected to be generated from this, apart from boosting steel and cement demand significantly.

“We are providing income tax relief for developers and home buyers as there is quite a lot of inventory in the real estate sector. At the moment, on the differential between the circle rate and the agreement value – you get 10% relief. We have decided to increase the differential from 10% to 20% till June 30, 2021 for only primary sales of residential units of value upto ₹ 2 crore, ”the minister said.

“We expect a lot of clearance of inventory and people will be able to pay less as the differential gap will be reduced. This will help the middle class which wants to buy when the housing sector is sitting on inventories, ”she said, adding that amendments will be made to section 43 CA of the Income Tax Act.

“Entities in 26 stressed sectors identified by the KV Kamath Committee, plus health care sector with credit outstanding of above ₹ 50 crore and up to ₹ 500 crore as on February 29, 2020, would now be able to avail 20% additional credit for a period of five years, with a moratorium of one year on principal repayment, ”Ms. Sitharaman said.

As per the Kamath committee, the stressed sectors include auto components, construction, gems and jewelery, hotel and restaurants, iron and steel, real estate and textiles.

Soumya Kanti Ghosh, group chief economic adviser, State Bank of India said the scheme could help as many as 40,000 firms but if the overall amount under the scheme stays at ₹ 3 lakh crore, that could be a constraining factor.So far, ₹ 2.05 lakh crore of liquidity has already been sanctioned under the scheme.

Separately, to free up working capital for contractors bidding for public projects, the center has decided to reduce the performance security payable on individual contracts to 3% from the prevailing 5% to 10% of project value.

The earnest money deposit requirement to bid for tenders is also being replaced by a bid security declaration for a period of one year, with the Minister expressing hope this will give them more room to bid for building infrastructure projects.

Q. I have been working as a freelancer since November 2019 after I quit my regular job. I have been getting the payment...
Read more

A 40-year-old man who took part in the company's COVID-19 vaccine candidate trial in Chennai has alleged serious side effects. The Vaccine Major...
Read more

Watch | What is a moratorium?

A video explainer on moratoriums which can be imposed on banks' operations by the government On November 17, the center, acting on the recommendation...
Read more