China begins work on railway up to Arunachal border 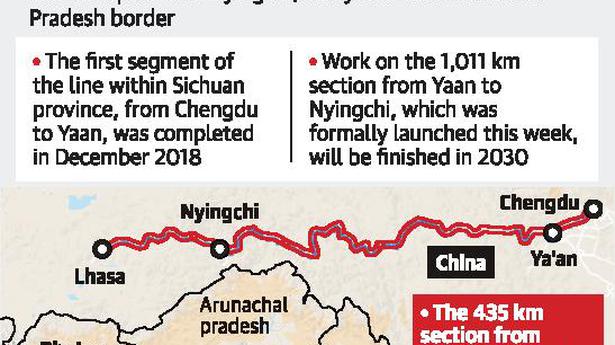 China has begun work on a strategically significant railway line – its second major rail link to Tibet – that will link Sichuan province with Nyingchi, which lies near the border with India’s Arunachal Pradesh.

Underlining the special importance that the Chinese government has placed on the project, President Xi Jinping on Sunday officially “gave the instruction” to being work on the project and called it “a major step in safeguarding national unity and a significant move in promoting economic and social development of the western region.”

The importance of the project, Chinese experts said, is two-fold. Like the Qinghai-Tibet railway line, which in 2006 connected Lhasa to the hinterland, this will be the second such route linking the Tibet Autonomous Region (TAR) to the hinterland.

Secondly, it will run right up to Nyingchi near the border with India, which it will link to both Lhasa and Chengdu, the provincial capital of Sichuan. The entire line will run from Chengdu to Lhasa, connecting the two capitals of TAR and Sichuan and cutting the journey from 48 hours to 13 hours.

Zhu Weiqun, a senior Party official formerly in charge of Tibet policy who earlier headed the Ethnic and Religious Affairs Committee of the National Committee of the Chinese People’s Political Consultative Conference, or upper house, was quoted as saying by state media the railway will help “transport advanced equipment and technologies from the rest of China to Tibet and bring local products out”.

“If a scenario of a crisis happens at the border, the railway can act as a ‘fast track’ for the delivery of strategic materials,” he said.

Xiong Kunxin, an academic at the Tibet University in Lhasa, told the Global Times the railway “is also of great significance in safeguarding national unity and consolidating border stability”. “As the railway runs near China’s southwest border areas, it will largely improve the efficiency and convenience of military personnel and material transportation and logical supplies,” he said.

The first segment of the line within Sichuan province, from Chengdu to Yaan, was completed in December 2018. Work on the 1,011 km-section from Yaan to Nyingchi, which was formally launched this week, and will be finished in 2030. Mr. Xi said ” the difficulty involved in the construction is rarely seen elsewhere, due to the complex geological and climatic conditions and fragile ecological environment along the railway”.

The 435 km section from Nyingchi-Lhasa segment has been under construction since 2015, and will be finished by the end of next year. State media reported as much as 75 per cent of this section consists of 120 bridges and 47 tunnels, with a designated speed of 160 km/h. This includes a 525 metre-long bridge across the Yarlung Zangbo river, as the Brahmaputra is called in Tibet, which has been built at a height of 3,350 metres. The official Xinhua news agency said this makes it the world’s highest concrete-filled steel tube arch railway bridge.

The Securities and Exchange Board of India (SEBI) has floated a consultation paper on the proposed framework for Gold Exchange in India.The proposal was...
Read more
National

Iran on Monday gave the Farzad B gas field to Petropars, a domestic gas producer. This is a setback for India’s energy ties with...
Read more

Residents of Gaza awakened by the overnight barrage described it as the heaviest since the war began a week ago The Israeli military unleashed a...
Read more
Bharat News