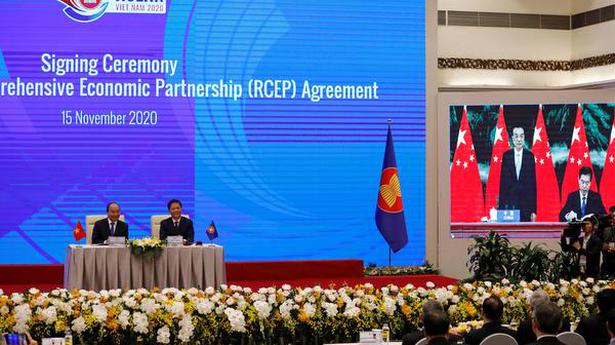 Fifteen Asia-Pacific nations, including China, signed the agreement on November 15.

China on Monday termed the Regional Comprehensive Economic Partnership (RCEP) agreement to create the world’s biggest free trade bloc as a “milestone of great significance”, while studies showed that the deal is more of a strategic significance to Beijing providing marginal economic impact.

Fifteen Asia-Pacific nations, including China, on Sunday signed the agreement. India, one of the leading consumer-driven markets in the region, pulled out of talks last year, concerned that the elimination of tariffs would open its markets to a flood of imports that could harm local producers.

A declaration by the countries which have signed the RCEP agreement said that they can start negotiations with India for joining the pact once New Delhi submits a written request stating its intention for the same.

Analysts say that without India, the agreement would not have much relevance as it cannot provide a big market combining India and China, the most populous countries in the world.

“After 8 years of negotiations, the RCEP was officially signed,” Chinese Foreign Ministry spokesman Zhao Lijian told a media briefing in Beijing while answering a question on the agreement.

“This means that the most promising agreement covering the largest population and economic volume was officially set and up. It’s a milestone of great significance, he said.

As coronavirus (COVID-19) continues to spread, unilateralism, protectionism are rising, he said, adding that the signing of the RCEP will be a strong boost to regional and global economic recovery.

“This shows strong support of all sides to multi-lateralism and free-trade, strong support to open and collective free trade regime. This is a show of support for collective efforts against common challenges,” he said.

Meanwhile, studies show the benefits RCEP will not outweigh the negative impact of the long-running U.S. trade war on China’s economy even though it will make China’s market much more integrated with the rest of Asia.

However, analysts agree that the trade pact, which covers 30% of the global economy, is far more strategically significant than providing a direct economic impact, Hong Kong-based South China Morning Post reported on Monday.

China may claim a symbolic victory in the signing of the world’s biggest trade deal in the face of ongoing U.S. disinterest in multi-lateralism, but the direct economic benefits will be marginal, the Post report said.

The trade agreement, initiated by the Association of Southeast Asian Nations (ASEAN) in 2012 but often regarded as a China-led counterpart to the Comprehensive and Progressive Agreement for Trans-Pacific Partnership (CPTPP), covers nearly one-third of the world’s population and gross domestic product (GDP).

However, while the RCEP adds incrementally to Chinese GDP, it will not be enough to cancel out the damage of the trade war with the U.S., research showed.

In June, researchers at the Peterson Institute for International Economics (PIIE) found that RCEP, would add 0.4% to China’s real income by 2030, while the trade war would trim 1.1%, should current hostilities persist.

U.S. President Donald Trump launched the trade war against China demanding Beijing to reduce the yawning trade deficit and slapped billions of dollars worth of tariffs on Chinese imports.

China looks for some relief on the trade front from U.S. when President-elect Joe Bidden takes charge in January, 2021.

A study conducted last year by researchers at the University of Queensland and the Indonesian Ministry of Finance found that RCEP would add just 0.08% to China’s economy by 2030. Over the same period, the trade war would slice 0.32% from its GDP.

Renuka Mahadevan, an associate professor at the University of Queensland who co-authored the 2019 report, said because of the dent made in the regional economy by the coronavirus pandemic, the benefit of RCEP might be more pronounced for signatories, since growth was coming from a lower base.

They pose some sharp questions to Petroleum Secretary Tarun Kapoor. An overwhelming majority of members of the Standing Committee on...
Read more
National

Prithviraj’s Cold Case to release on Amazon Prime Video on this...

In another twist to the factional fight in the State BJP over the demand for a leadership change, Arvind Bellad, MLA, identified with the...
Read more
Trending

The three-man crew will be in orbit for three months. The first group of Chinese astronauts on Thursday entered the country’s under-construction space station, a...
Read more

The ship’s operator said the wreck of the Singapore-flagged X-Press Pearl “is now wholly sitting on the seabed at a depth of 21 metres...
Read more

creators will also be allowed to design services for creative assets, promote within and outside Clubhouse, and help build an audience. (Subscribe to our Today's...
Read more
- Advertisement -