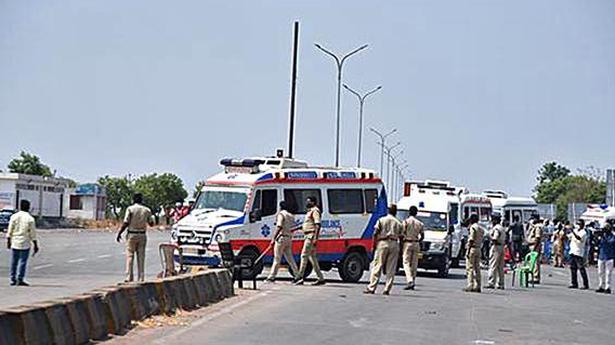 The details of the dead patients could not be ascertained as only their place of origin was recorded on the check post.

More than 60 ambulances with patients were turned away from the Panchalingala-Pullur inter-State border within Jogulamba – Gadwal district in Telangana from Thursday midnight to 7 p.m. on Friday despite a court order restraining such acts. Two patients died during the waiting period of ambulances at the border check post.

The details of the dead patients could not be ascertained as only their place of origin was recorded on the check post. They hailed from Nandyal and Kadapa. By the time the Kurnool Superintendent of Police Fakkeerappa was alerted about the tense situation at the border check-post, there were 18 ambulances waiting for the Telangana police to permit them to travel to Hyderabad.

“As the situation turned grave for four patients while I was personally present there, we shifted them to the Government General Hospital at Kurnool, and sent back the remaining ambulances to various other hospitals,” the SP told The Hindu. Even as the police officer was talking to The Hindu at 7 p.m. from the border check post, the Telangana police officers did not allow the ambulances from A.P. side.

“I spoke to them in view of the Telangana High Court order, but they said they had not received a copy and hence did not have the permission to allow the patients in ambulances without e-permission. Two patients out of the 20 in ambulances currently waiting here, are running out of oxygen and we have provided oxygen cylinders from the Police Hospital in Kurnool,” Mr. Fakkeerappa said.

Kurnool MLA Hafeez Khan, who reached the toll plaza, held discussions with the police personnel but to no avail.

Due to severe shortage of hospital beds in Hyderabad, as claimed by Telangana government, the police officials of the State at the check-post had been turning away patients and their attendants wanting to travel to Hyderabad from Rayalaseema districts of AP.

“We got strict instructions to allow vehicles with an ePass from police or State Health Department, but not from A.P. police” an officer of Telangana said on condition of anonymity.

He said that they are doing ‘just’ enforcement work and the crucial paper work was being done by health and revenue departments of Telangana government.

“Only after getting a nod from the Health officials, who again cross-examine with the hospital staff, we are letting the vehicles cross the border. We have no role to play in it,” the officer while examining the documents of an ambulance said.

Even those who had online permission from the Telangana police were sent back citing various reasons, including severe shortage of oxygen-supported beds in the State capital.

Despite clear instructions from the State government to allow ambulances carrying COVID-19 patients with prior tie-ups with any hospital in Hyderabad, police at the toll gate stopped dozens of medical emergency vehicles on Friday morning. District Superintendent of Police, Ranjan Ratan Kumar didn’t respond to repeated call and messages by this correspondent to comment on the issue.

Since Sunday evening, hundreds of ambulances with COVID-19 patients on liquid oxygen support, who require immediate medical assistance, have been turned away by the police of Telangana citing various reasons. Family members of several patients pleaded with the police to allow them to reach Hyderabad and save the life of their kin, but in vain.