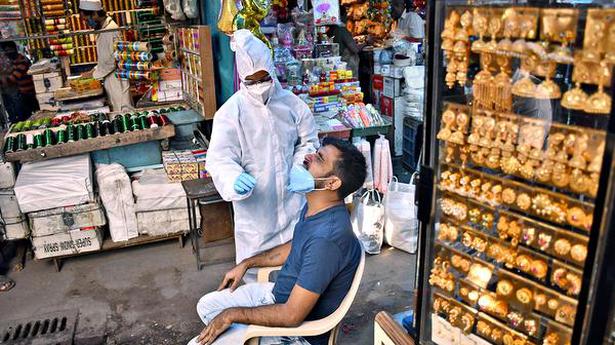 As news about various vaccines in the last few days brought some cheer, Prime Minister Narendra Modi held a meeting with Chief Ministers. While telling the State governments to keep logistics ready for vaccine roll out, Prime Minister Modi said the primary focus of the States should still be in containing the spread of COVID-19, especially after the post festival surge being seen in several States.

You can track coronavirus cases, deaths and testing rates at the national and State levels here. A list of State Helpline numbers is available as well.

Here are the updates:

Karnataka Chief Minister B.S. Yediyurappa has claimed that there were indications of the vaccine against COVID-19 becoming available in about four to six weeks.

Speaking to reporters after his arrival in Mysuru on Tuesday, Mr. Yediyurappa referred to the virtual meeting Prime Minister Narendra Modi had with Chief Ministers of different States earlier in the day and said the Prime Minister had asked States to prepare themselves for distribution of the vaccine in all the districts.

He said the Prime Minister had asked the Chief Ministers to establish a system for proper distribution of the vaccine, which can take about four to six weeks.

When asked about the possibility of a fresh lockdown in view of indications of a possible second wave of COVID-19 infections, Mr. Yediyurappa nodded in the negative and walked away.

Meanwhile, Home Minister Basavaraj Bommai told presspersons that the government had decided to constitute a State-level steering committee headed by the Chief Minister to monitor vaccination for COVID-19. Similarly, Deputy Commissioners and tahsildars will head steering committees at the district and taluk levels, he said.

Later, Mr. Jagan held a review meeting with officials and asked them to focus on methods to be followed on storage and distribution of the vaccine.

Directing them to prepare an action plan on storing the vaccine at optimum temperature, as well as transporting it to remote areas at the same temperature, the Chief Minister asked them to focus on the infrastructure facilities required for refrigeration of the vaccine. “Prepare an action plan on readiness of vaccine distribution. Collect technical information on the respective issues and also take relevant information from various companies and conduct a study on it,” he said.

Others to get vaccine first as Canada lacks production capacity, says Justin Trudeau

Canadians can expect the first doses of a Covid-19 vaccine in early 2021, likely later than those countries that can produce it themselves, Prime Minister Justin Trudeau said Tuesday.

“Canada no longer has any domestic production capacity for vaccines,” Mr. Trudeau told a news conference.

“We used to have it decades ago, but we no longer have it,” he said, while “countries like the United States, Germany and the UK do have domestic pharmaceutical facilities, which is why they’re obviously going to prioritise helping their citizens first.”

Mr. Trudeau added, “we’ve begun to invest once again in ensuring that Canada will have domestic vaccine production capacity.”

In case of another pandemic in the coming years, he said “we never want to be caught short again, without the ability to support Canadians directly.”

After Gautam Buddha Nagar, the Ghaziabad administration started random screening of people travelling from Delhi for COVID-19 from Tuesday evening.

This has come after the two districts saw a surge in cases after Deepavali.

Officials from the health department stopped travellers from Delhi at the Ghazipur border and tested them through rapid antigen test kits. Later, they were joined by police officials for effective management.

“We have done random sampling earlier, but this time we are doing it in the evening to check whether Ghaziabad residents who are working in Delhi are bringing the virus from the Capital, which has seen a spike in cases after Deepavali. We will do it for a few days and calculate the positivity rate,” said N.K. Gupta, Chief Medical Officer (Ghaziabad) adding the test were voluntary.

The police force is struggling under the onslaught of the pandemic. Three police personnel succumbed to COVID-19 on Saturday including an assistant sub inspector...
Read more
National

Physician Yaroslav Ashikhmin said that test results he received from Navalny’s family show him with sharply elevated levels of potassium, which can bring on...
Read more
World

The Government of National Unity also urged the council to help get mercenaries out of the oil-rich country, as it heads toward December elections...
Read more