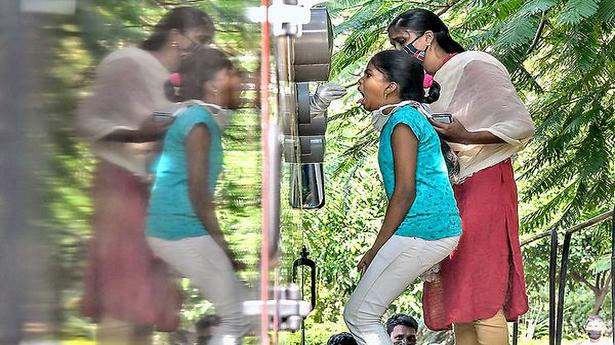 The Ministry of Home Affairs (MHA) on Wednesday issued fresh guidelines for “surveillance, containment and caution” in view of the surge in COVID-19 cases due to the ongoing festival season and onset of winter. said that States and Union Territories (UTs), based on their assessment of the situation, may “impose local restrictions” such as “night curfew” with a view to contain the spread of COVID-19.

You can track coronavirus cases, deaths and testing rates at the national and State levels here. A list of State Helpline numbers is available as well.

Here are the updates:

The Delhi government on Wednesday completed a door-to-door survey of over 57 lakh people.

Till Tuesday night, 13,516 people were found symptomatic during the survey and 11,790 of them were tested for COVID-19, as per official data seen by The Hindu.

The government also tested 6,546 people, who were contacts of the 11,790 symptomatic people.

A total of 1,178 people were found positive till Tuesday night, as per the data.

The final data of the survey was still being tabulated at 9 p.m. on Wednesday. The government is yet to officially release any details or data on the survey.

For representational purpose only.

The Health Department has again revised the guidelines regarding the management of the bodies of those who died of COVID-19, in line with the Union Health Ministry’s guidelines, so that the close relatives can see the deceased at the isolation ward, mortuary and the place of burial.

At the burial grounds, the relatives will be allowed to see just the face of the deceased by opening the zip on the body bag. At this point also, necessary religious rituals or prayers may be performed. A maximum of 20 persons can participate in the funeral and physical distance should be maintained. Those above 60 years, children less than 10 years or those with serious co-morbidities including respiratory problems should not participate in the funeral.

Class X, XII teachers to report for work in Kerala

Teachers handling Class X and Class XII (Plus Two) subjects in Kerala schools will report for work from December 17.

A statement from the office of the Minister for General Education said 50% of the teachers on a day should attend school from December 17. This is to improve academic support being provided to students and gear up for revision classes for them.

The decision, taken after a meeting the Minister had with the General Education Secretary and the Director of General Education, comes close on the heels of Chief Minister Pinarayi Vijayan’s announcement on Tuesday that the government would consider if it was feasible to reopen educational institutions for higher classes if COVID-19 cases continued to dip steadily.

A group of students returning home after attending classes, in Vijayawada on Wednesday.

Education Minister Adimulapu Suresh on Wednesday said vibrancy was returning to school campuses with not less than 50 % of students attending classes.

The Minister said school campuses were becoming vibrant zones with hassle-free teaching amid the ongoing Nadu-Nedu works that aim at changing the face of the school buildings and the ongoing ‘Jagananna Vidya Kanuka Vaarotsavalu’.

He said the COVID-19 guidelines were being followed by one and all.

The Maharashtra government on Wednesday exempted on-duty cockpit and cabin crew members of all airlines from RT-PCR tests across airports in the State.

The exemption, however, will be depend on whether the respective airlines adhere to all the necessary COVID-19 protocols. Chief Secretary Sanjay Kumar said.

The exemption was granted after the government received a request from Air India, the order stated. In its revised standard operating procedures on preventive measures to check the spread of COVID-19, issued on November 23, the State government made it mandatory for all persons seeking to enter the State from Delhi, Rajasthan, Gujarat and Goa to carry RT-PCR negative reports amid the rising number of cases in these States.

A ‘Jan Andolan’ campaign was organised by the Waltair Division to spread the message of COVID-19-appropriate behaviour. Campaigns are being conducted in all stations, sub-divisional offices and loco sheds with posters and banners to spread awareness. The Division is also playing jingles and making public announcements through the public address system at the stations. Awareness leaflets are being distributed to passengers as part of the campaign. Social media is also being used extensively to disseminate the message of COVID-19 health protocol.

Walls of major stations are used to for awareness messages. The railway personnel in different locations have taken a pledge to follow and spread awareness about the pandemic in their own locality.

With the introduction of additional special trains, ‘Jan Andolan’ campaign has been intensified. Passengers are being asked to maintain health and hygiene protocol, avoid overcrowding, maintain physical distancing, use masks and face shields, wash hands frequently and avoid train journey if they feel unwell.

Panchalinga Darshana to be restricted to 1,000 people a day

Vaidyanatheshwara Temple at Talkad is one of the five Shiva temples visited during Panchalinga Darshana.

The famed Panchalinga Darshana to be held at Talkad in T. Narsipur taluk of Mysuru district will be restricted to only 1,000 people per day in view of the COVID-19 pandemic. This was stated by Chief Minister B.S. Yediyurappa who participated in a meeting held to review the ongoing preparations for the event slated to take place from December 10 to 19 and called for keeping the event simple.

The dates and years of the Panchalinga Darshana is based on astrological calculations as per the Hindu almanac and is not an annual event. The last Panchalinga Darshana was held in 2013 while sometimes there tends to be a gap of almost 12 years between the two editions. It entails darshan of the five temples dedicated to Lord Shiva – Sri Vaidyanatheshwara, Sri Maruleshwara, Mudukothore Sri Malliakarjunaswamy, Sri Pathaleshwara, and Sri Arakeshwara – on the same day.

Officials, who participated in the meeting, said another round of discussions would be held on Thursday to chalk out a plan on regulating the entry of the crowd. “Whether we should have an online registration system or should the entry be on first come, first served basis will be decided soon,” the officials said.

Delhi Environment Minister Gopal Rai on Thursday tested positive for coronavirus. Mr. Rai is the third minister in the Arvind Kejriwal government to have contracted the virus.

An official said that Mr. Rai, who is also AAP’s Delhi convenor, had met party workers around Diwali.

External Affairs Minister S. Jaishankar has thanked Bahrain for taking “special care” of the Indian diaspora in this Gulf kingdom during the coronavirus crisis. On a two-day visit to Bahrain from November 24 to 25, Mr. Jaishankar held talks on bilateral issues as well as regional and international issues of mutual interest with his Bahraini counterpart Abdullatif bin Rashid Al Zayani.

The novel coronavirus has infected over 85,800 people and claimed 339 lives in the oil-rich Gulf nation.

According to the website of the Indian Embassy in Bahrain, the country has around 3,50,000 Indian nationals, which comprise a third of Bahrain’s total population of 1.4 million.

The All India Syringe and Needle Manufacturers Association (AISNMA) has now written to the Central Government offering an additional capacity of over 350 million syringes per month in order to meet the entire demand for mass COVID-19 vaccination through domestic production. The Association said that this additional capacity has already been built up by its members, having observed the critical shortage of masks and PPE (personal protection equipment) kits faced by India and other countries around the world earlier this year.

AISNMA is the sole nodal association for syringe manufacturers in India and has 19 members located across the country.

The third phase of clinical trials of Covaxin began at the Infectious Disease (Fever Hospital) Hospital at Gorantla on Wednesday. District Collector I. Samuel Ananda Kumar launched the vaccine trials. The vaccine vials have come from the Indian Council for Medical Research, Pune.

The Collector said that based on the guidelines of ICMR, the phase-3 trials have begun at the ID Hospital. The phase-2 clinical trials were held at Nizam’s Institute of Medical Sciences, Hyderabad in which 717 patients were covered.

The ICMR trials at ID Hospital would cover 1,000 patients in a month and the detailed report would be sent to ICMR.

AstraZeneca and Oxford University have acknowledged a manufacturing error that is raising questions about preliminary results of their experimental COVID-19 vaccine.

A statement describing the error on Wednesday came days after the company and the university described the shots as “highly effective” and made no mention of why some study participants didn’t receive as much vaccine in the first of two shots as expected.

There is this nice feeling that you get when you buy a new vehicle. While for some it could...
Read more
National

Amid claims by patients and their kin, especially on social media, that private hospitals and laboratories were avoiding testing people for COVID-19, the...
Read more
National

Party leaders hold closed-door meeting with candidates at Guwahati. After the candidates of one of its allies returned from Rajasthan on Friday in view of...
Read more
World

19-year-old opened fire at FedEx facility. Four Sikhs, including three women, were among eight people killed in a mass shooting at a FedEx facility in...
Read more
National

Amid claims by patients and their kin, especially on social media, that private hospitals and laboratories were avoiding testing people for COVID-19, the...
Read more