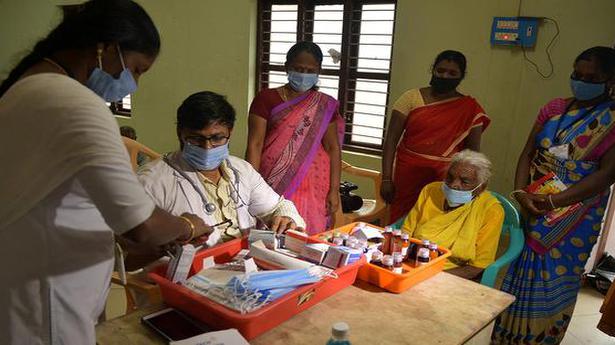 An eerie silence prevailed along the Nagapattinam-Karaikal coast ahead of the landfall of Cylone Nivar on Wednesday.

Squally weather, accompanied by heavy rain and strong winds, forced people to remain indoors. The sea was rough throughout the day. No one was allowed to venture into the sea as signal number 6 cyclone alert flag was raised in the Nagapattinam and Karaikal ports.

Karaikal streets wore a deserted look as Section 144 of the Code of Criminal Procedure (CrPC) was promulgated to keep people indoors.

The fishermen of Akkaraipettai in Nagapattinam and Arcottuthurai near Vedaranyam moved their boats to safety. They were all moved to the neighbouring cyclone rescue centres. Police personnel patrolling the coastal hamlets made it a point to shift the fishermen to rescue centres.

People from all walks of life, including traders, merchants, fishermen and farmers, stayed indoors in Thanjavur, Tiruvarur and Nagapattinam districts. Most of the highways, including the Thanjavur—Nagapattinam Road, looked deserted, as the State government had suspended public transport. Only a few vehicles, mainly ambulances, were seen on the roads. A majority of commercial establishments remained closed.

Anxiety among the people as well as the officials was palpable, as they were bracing themselves to face the fury of a severe cyclonic storm within two years of Cyclone Gaja wreaking havoc in Nagapattinam, Tiruvarur, Thanjavur and Pudukottai districts.

As of 5 p.m. on Wednesday, 45,695 persons had been evacuated in Nagapattinam district and housed in 179 cyclone rescue centres, Collector Praveen P. Nair told The Hindu.

“The northern parts of the district have been witnessing heavy rainfall with gusty winds since the afternoon. No one is allowed on the roads. They have been asked to remain indoors. We are closely monitoring the situation,” he added.

He said medical teams had been deployed to the cyclone rescue centres. They have been asked to carry out COVID-19 testing for the vulnerable. People who test positive would be isolated.

H.M. Jayaram, Inspector General of Police, Central Zone, told The Hindu that 9,500 police personnel had been mobilised for carrying out rescue and rehabilitation work. They have been put on maximum alert.

A total of 205 villages and areas in Nagapattinam and Mayiladuthurai districts have been deemed cyclone-prone. As a precautionary measure, the residents, particularly fishermen, have been moved to safer places.

Barring a few instances of boycott and an overarching presence of the pandemic, polling for the byelections to the Belagavi Lok Sabha constituency and...
Read more
Bharat News