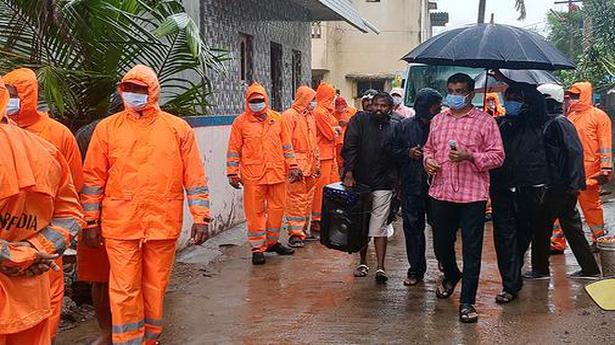 The Army has deployed 22 rescue teams in Tamil Nadu and Puducherry in the wake of Cylone Nivar.

The Army has deployed eight teams from Bengaluru, two teams from Coimbatore and 12 teams from Chennai. The Navy deployed INS Sumitra from Visakhapatnam with five flood relief teams, while INS Jyoti reached the Tamil Nadu shores earlier. The two ships will be utilised to transfer relief material along the Tamil Nadu coast, a Defence release said.

The Coast Guard has deployed four Offshore Patrol Vessels with disaster relief items for immediate use in affected areas.

Meanwhile, National Disaster Response Force (NDRF) teams, deployed in Tamil Nadu and Puducherry, visited a number of coastal areas and requested those living there to evacuate and move to relief camps.

There is a quiet terror about the 2015 Denis Villeneuve directorial Sicario. At a simplistic level, the Emily Blunt,...
Read more
National

78.36% electors had exercised their franchise till 5 p.m. in the polling held in 45 Assembly constituencies. High voter turnout and sporadic incidents of violence...
Read more
Trending

78.36% electors had exercised their franchise till 5 p.m. in the polling held in 45 Assembly constituencies. High voter turnout and sporadic incidents of violence...
Read more

Vehicles to be colour coded to limit movement in Mumbai