Data | U.S. presidential polls: Why is there a delay in the results of some States? 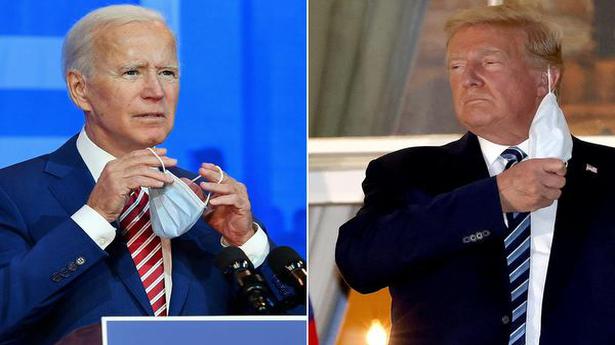 Winners in States with 88 electoral college votes are yet to be decided in the U.S. Presidential elections. A large proportion of the mandate was registered in the form of mailed-in votes, in which Democrats held a significant edge, leading to a late “blue shift” in Joe Biden’s favour.

State of the matter

The tilemap depicts the results for States where a winner was called. States won by Trump are marked in red while those won by Biden are in blue. States for whom results were still hanging in the balance are coloured in lighter tones (blue for Biden in the lead and red for those where Trump was ahead).

A game of margins

The chart depicts the State-wise vote share difference (in percentage points) between Trump and Biden. Biden held the lead in States coloured blue, and those coloured red were led by Trump.

The delay in counting

A record number of votes were sent in through mail this year. In most States mailed-in ballots are counted after early in-person votes and Election Day votes are counted. So, States such as Pennsylvania and Michigan, where the election was too close to call and also had a lot of uncounted mail votes had become key States to look out for.

These States also contribute a significant number of electoral college votes and thus the delay in counting in these States meant a winner could not be chosen. Also, voters affiliated to the Democrats preferred to vote by mail more than those registered as Republicans.

Which is why the leads initially pointed to a Trump win in these States but leads changed or narrowed once the mailed-in ballots were accounted for. For instance, in Pennsylvania, Trump was leading by 10% points over Biden in the overall votes, late night on November 4. However only 78% of the votes were counted with about 1.7 million outstanding (and mostly mailed-in votes).

Also in Pennsylvania, Biden had secured 78.4% of the tallied mail votes while only 20.7% of them favoured Trump. Thus, a winner could not be announced quickly as mailed-in ballots were skewed in favour of Biden while in-person votes leaned Trump’s way. Many of the mail-in votes were yet to be counted.

Democrats garner the bulk of the mail-in votes

Mail-in votes played a significant part in the outcome of this election. Section 1 of the Table shows the number of mail-in votes polled in key States, and what % of them were affiliated to parties (this data is provided only for States which make this distinction). Section 2 shows the number of mail votes counted and the vote share % secured by candidates among them. Some States do not give the vote % secured among mail votes, but the split is given for all early votes (mail votes + early-in person votes), which are provided in Section 3. Democrats swept mail-in ballots.