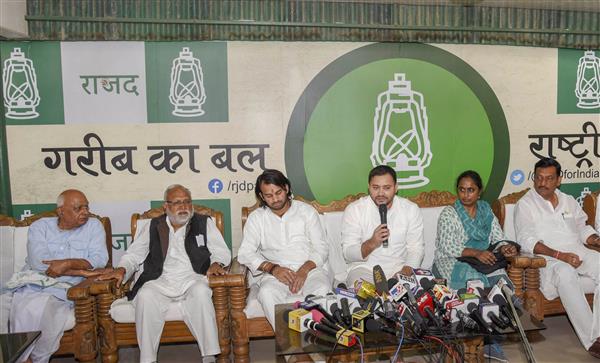 Delay in finalising seat sharing for the Bihar election adversely impacted the Mahagathbandhan’s poll performance, senior Congress leader Tariq Anwar said on Sunday, asserting that the Congress must learn from it and complete alliance formalities well in advance for upcoming assembly polls.

Anwar, party’s general secretary and a veteran leader from Bihar, acknowledged that there were shortcomings due to which the party performed worse than other ‘Mahagathbandhan’ constituents and asserted that the high command was serious about an introspection as well as a thorough analysis of the results.

In an interview with PTI, Anwar said the Bihar poll results were “definitely below” the Congress’ expectations and it was a setback to bag only 19 out of the 70 seats it contested.

“There was an environment of change with enthusiasm among the common people for it, but we could not exploit that. We had the expectation that with the Congress fighting on 70 seats, it would win at least 50 per cent of the seats,” the former Union minister said.

“Our government was not formed and we (the Congress) also have a responsibility in that. Going forward, our efforts will be aimed at strengthening the Congress and the Mahagathbandhan and we will make a strategy for it,” he said.

His remarks assume significance as several poll analysts have stated that the Congress dragged the Mahagathbandhan down as it fell short of the majority mark, with the NDA under Nitish Kumar’s leadership emerging victorious in the polls by a narrow margin.

Anwar, who was a member of the party’s poll management committee, said there should be an introspection and “we have also demanded that it should happen”.

He said the high command was ready for an introspection and stressed the top leadership had given all possible support during the polls with former party chief Rahul Gandhi also holding many public meetings in the state.

“But there have been shortcomings on our part otherwise we should have won 35-40 seats. So whether there were shortcomings in organisation or campaign, all of that will be discussed and analysed and it will be ascertained why the Congress’ performance was not at par with other Mahagathbandhan partners,” he said.

Anwar said the reasons for the below par showing cannot be ascertained immediately, but what was important was to identify the mistakes committed and ensure they are not repeated in the Assembly polls in four states and one Union Territory in the coming months.

“We want that discussions be held with those involved in this election, our candidates and District Congress Committees in Bihar and only then we can reach a conclusion,” the 69-year-old leader, who has won Lok Sabha polls multiple times from Bihar’s Katihar, said.

The high command is definitely concerned over the Bihar results, he said.

Asked if delay in firming up the Mahagathbandhan alliance and the seat sharing arrangement hurt the poll performance of the Opposition coalition, Anwar said, “Yes, I remember that Rahul ji had said in July itself that we should finish the process of firming up of the alliance and other formalities.”

“Whatever the reason, that did not happen and you are right there was a lot of delay in finalising the alliance and it was sealed when the election was very near,” he said.

If the formalities had been completed earlier, then maybe the Mahagathbandhan would have gotten the advantage in the election campaign, Anwar said.

Alliance contradictions need some time to be ironed out and we did not get that time, he said.

On rumblings in the Congress over ticket distribution, Anwar said the party is assessing what shortcomings were there.

The high command is ready for introspection, but there are Diwali and Chhat festivals, after which senior observers of the party may be sent to the state for a thorough analysis.

He said the Congress needs to learn quickly from its mistakes as elections are due in West Bengal, Assam, Tamil Nadu, Kerala and Puducherry next year for which the party should be battle-ready.

“We should be ready beforehand and I agree that if we have to go for alliances then the formalities of those alliances should be completed as soon as possible,” he said.

On All India Majlis-e-Ittehad-ul-Muslimeen denting the Mahagathbandhan, Anwar said if any political party wants to contest “we cannot stop them”, but there is a “common understanding” that AIMIM’s role is in a way to help the BJP.

“If we would have moved to protect our standing in Seemanchal and carried out our party’s activities early, then AIMIM would not have succeeded there. With the coming of AIMIM certainly the secular parties have been hit and if we look at it they have won five seats but would have damaged the Mahagathbandhan on 15 seats,” Anwar said.

Asked if lack of clarity over party presidency was hurting Congress, he said the party’s poll panel under Madhusudan Mistry has already started the process for getting a full-time president.

Due to coronavirus pandemic, an AICC session could not be called, but once the situation stabilises the process will be completed next year, he said.

Anwar also hailed Rahul Gandhi for setting an example for other leaders by stepping down after the 2019 Lok Sabha polls defeat.

“There is no dispute on Rahul Gandhi (for the choice for presidency), question is whether he wants to take it up,” he said.

Tycoon-Led Banks Could Be Dangerous For India

<!-- -->Is India opening the door for big businesses to take over its banking industry?A working group set up...
Read more
Trending

The IJT has already been tested to its full envelope in terms of speed, altitude and load factor (g envelope) and has also been...
Read more