Demand for water for second crop under KC Canal mounts 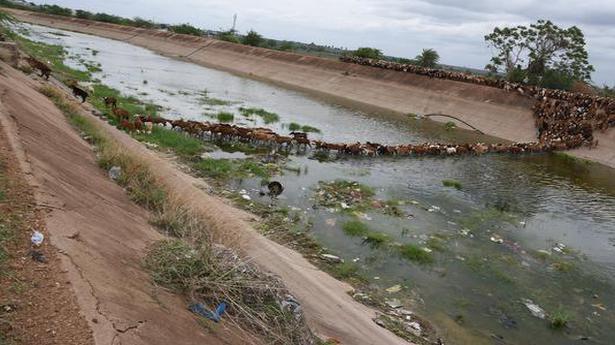 According to information, the localised ayacut under KC Canal project is 2,65,628 acres and the assured water allotment by the Krishna Water Dispute Tribunal (KWDT) is 31.90 tmcft to the project.

But, in kharif 2020, the ayacutdars under KC Canal raised crops to an extent of 1,46,000 acres which were damaged due to heavy rains and floods that occurred in the months of August, September and October. The crops were damaged totally due to floods and heavy rains.

The ayacutdars are requesting the government for water to rabi crops under the KC Canal. In all the districts of delta area including Anantapur, farmers are getting water up to April through Handri-Neeva Sujala Sravanthi (HNSS). Now, the irrigation officials are encountering a question from the farming community: “Why the farmers of KC Canal are not getting water even though they are having allotment of water and having full storages in Srisailam?”

Rayalaseema Saguneeti Sadhana Samithi leader Bojja Dasarathrami Reddy says that the government has to clear air on canal widening works. The government has been requested to release water for the second crop if it was not taking up the works. As the water is also available, the farmers will be benefited, he says.

Irrigation sources say that if the storage available in Srisailam Reservoir were to be considered, the pumps of Muchumarri and Malyala can be run up to March 31, 2021. Also, due to the fire accident that occurred in the Left Power House of Srisailam, the drawls from Left Power House has been reduced to 50%. Hence, the Srisailam Reservoir level may continue till March 31,2021. Hence, allowing the second crop under KCC is somewhat benefit to the farmers to the balance ayacut in the district.

“So, the drawl of water from Srisailam through Banakacherla may not be a problem if second crop was allowed to KCC ayacut,” opines an official, who didn’t want to be quoted.