Diego Maradona: Argentine’s genius was innate in his veins 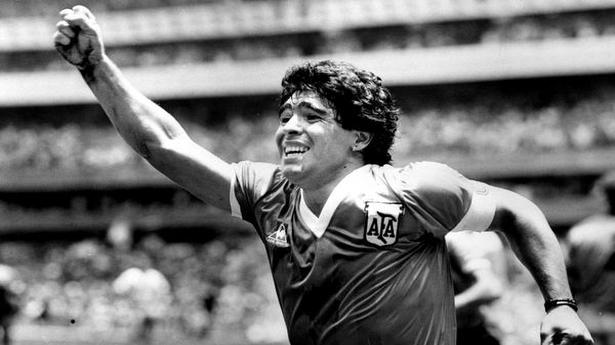 A goal scored in football is the highest form of sporting high. The crowd is on its feet, the striker is in his slice of heaven, team-mates are delirious and soul-numbing grief is the shroud that chokes the rivals.

Football – the calisthenics between fast legs and a ball, the art that fuses the dodge and the sprint while a sphere beats the goalkeeper – lost its heart-beat when news broke that Diego Maradona passed away at 60, back home in Argentina.

Yes, there is Pele with his description of football as the beautiful game. And in that pantheon of excellence with the Brazilian legend saying the right things, Maradona, the Argentinian wizard, the Boca Juniors maestro, the hero for Napoli, walks in with a saunter, curly hair, stocky build, magic in his feet and never the politically correct word emanating from his lips.

This was genius with shades of the devil, and strangely in 1986, Maradona was one with the gods. This was the fusion of extreme contrasts.

Great athletes impose their will on the game and Maradona was right up there.

He believed that Argentina will win the World Cup at Mexico in 1986 and he backed that intuition with a footballing skill that was suffused with a magic realism that would have made Gabriel Garcia Marquez proud. Such was Maradona’s dominance — dribble, feint, sell a dummy, score a goal and then grin like a child at a candy store. If you were a sporting fan of the 1980s, this was bliss multiplied by infinity.

But he wasn’t entirely clean; a ‘header’ against England in that World Cup which he owned, emerged from his hands. It was an adrenaline-laced blur, the leap, the head swivelling, a hand jutting out and a goal was scored.

A mural depicting Diego Maradona, by street artist Jorit, is painted on a building in Naples, Italy.

Back then television wasn’t all encompassing. The goal was awarded to Argentina and in the larger scheme of things, the Falkland Islands skirmish between his nation and England was ruling the airwaves.

That old aphorism swept the air – all is fair in love and war. Years later Maradona admitted that the goal was struck with his hand but in 1986, he philosophically spoke about the ‘Hand of God’, and a controversy was swept under the carpet of cosmic greatness, which also contained the ‘goal of the century’, scored in the same match, after a bewitching run that started in his own half.

Maradona won that World Cup for Argentina, it was his high and equally became the cross that Lionel Messi had to bear while trying to get the Latin American nation excel at the World Cup over the last decade.

Messi the FC Barcelona legend is not exactly Messi the Argentinian whiz kid. And the exploits of Maradona was too much of a legacy to carry forward.

Maradona, however, could not extend that 1986 spirit of zest into the subsequent World Cups.

He did helm his men into the 1990 final but in the 1994 championship in the USA, ignominy wrapped him forever as he failed a drugs test.

The genius had wilted, caught up in his own super-hero image. Drugs, excessive alcohol and delusion undid the great man. He turned obese, had health issues but there was still some magic in his feet.

Some years back, he was in Kerala, busy promoting a jewellery brand. Having downed a few rums in his room, he was high-spirited. Along with Indian legend I.M. Vijayan at Kannur, the maestro juggled a football with his legs, took it on his chest, headed it a few times and stayed in control.

Time was frozen, sporting paradise had descended on Malabar, and Maradona showed that genius was innate in his veins.

But on a Wednesday night in a year lost to the coronavirus, football’s maverick-great breathed his last. The sport is poorer while searing memories remain.

SA could be excluded from World T20: skippers

The captains of the three South Africa squads signed a joint statement expressing concern over the country’s possible exclusion by the ICC due to...
Read more