Differently abled woman gets audience with CM, and a job

Uttarakhand ex-CM roasted on Twitter for saying ‘Coronavirus is a living organism, has right to live’ 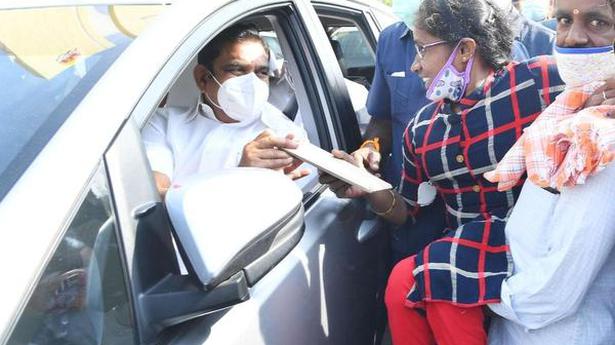 Within two hours of getting her petition, Palaniswami hands her appointment order

Chief Minister Edappadi K. Palaniswami’s kindheartedness towards the differently abled came to the fore on Wednesday when he accidentally saw a disabled woman waiting on the roadside with a petition for a job when his convoy was crossing her.

When the Chief Minister’s convoy was leaving Government Thoothukudi Medical College Hospital premises after Mr. Palaniswami inaugurated the ‘Liner Accelerator’ facility at the cancer care centre, he saw a differently abled woman waiting with a petition in her hands along with others. Much to the surprise of everyone, the CM’s car stopped suddenly near the woman.

Even as a person there was carrying her in his hands, the Chief Minister lent a patient hearing to her grievance and received her petition. The woman, Mareeswari from Muthaiahpuram on the city outskirts, told the CM that she was struggling to run her family with the trivial earnings of her husband, a casual labourer.

“If I am given a job, I will discharge my works properly and to the satisfaction of my higher-ups,” the woman, with folded hands, told the Chief Minister, who listened to her plight with a smile. Before leaving the spot with the woman’s petition, he asked the officials to bring her immediately to the Collectorate where he chaired the COVID-19 review meeting.

When Ms. Mareeswari arrived at the Collectorate in her wheelchair, the order appointing her as ‘Ward Manager’ at Government Thoothukudi Medical College Hospital was handed over to her by Mr. Palaniswami in the presence of Minister for Public Health C. Vijayabaskar, Minister for Information Kadambur C. Raju and Collector Sandeep Nanduri.

As people celebrate the festival of Eid-ul-Fitr today, celebrities took to social media to share photos of the festivities...
Read more
World

The flight will be the first after the lifting of a two-week ban on anyone coming from India. The first repatriation flight for Australians...
Read more
National

The accident occurred when the policemen were waiting to receive a consignment of COVID-19 vaccines. Two police personnel, including a Head Constable, were killed...
Read more
National

‘If Pappu Yadav is not released from jail within two days,...

The accident occurred when the policemen were waiting to receive a consignment of COVID-19 vaccines. Two police personnel, including a Head Constable, were killed...
Read more

‘If Pappu Yadav is not released from jail within two days, I will go on fast,’ says his wife

‘My husband’s fight for common people and to help COVID-19 patients in all possible manner will continue,’ says the former MP. Ranjit Ranjan, wife...
Read more

Has direction on SMS on COVID-19 result been implemented effectively: Karnataka HC

The High Court of Karnataka on Thursday told the State government that one of its staff members, who died of COVID-19 on Wednesday night,...
Read more
Bharat News