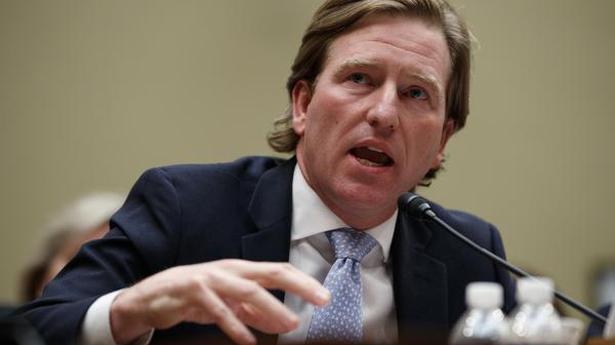 The DHS official had said the claims were ‘either unsubstantiated or technically incoherent’.

In his latest effort to fight the outcome of a Presidential Election he is yet to concede, U.S. President Donald Trump fired senior Department of Homeland Security (DHS) official Christopher Krebs who had countered his claim that the election was rigged. Mr. Trump announced the firing on Twitter.

“The recent statement by Chris Krebs on the security of the 2020 Election was highly inaccurate, in that there were massive improprieties and fraud — including dead people voting, Poll Watchers not allowed into polling locations, ‘glitches’ in the voting machines which changed votes from Trump to Biden, late voting, and many more. Therefore, effective immediately, Chris Krebs has been terminated as Director of the Cybersecurity and Infrastructure Security Agency [CISA],” he said in a tweet, which Twitter marked as disputed.

Mr. Krebs has led the CISA since it was formed two years ago.

The President’s allegations of “massive improprieties” are unsubstantiated. His campaign and some allies have filed lawsuits in a number of battleground States, but none of these have thus far successfully overturned any results.

Trump is not conceding. What’s next?

Earlier on Tuesday, Mr. Krebs had tweeted,“59 election security experts all agree, ‘in every case of which we are aware, these claims either have been unsubstantiated or are technically incoherent’”.

On Monday, 59 scientists and officials — many of them computer scientists and security researchers — had released a letter stating that to their knowledge, there was no “credible evidence” that the outcome of the election in any State had been altered as a result of being technically compromised.

“Honored to serve. We did it right. Defend Today, Secure Tomrorow. #Protect2020,” Mr. Krebs tweeted on Tuesday evening after he had been fired.

Mr. Krebs had told officials last week that he expected to be fired, as per reports in the American press.

"Remarkable how our doctors and scientists have worked in quick time to strengthen the global fight against COVID-19," PM...
Read more
National

The Big Day couples Daniel-Tyrone to Ami-Nithin on life after the...

The Big Day, which started streaming on Netflix from February 14 onwards, gave us a ringside view into six lavish weddings. The series featured...
Read more
Trending

Indoo Ki Jawani, Pagglait, and More on Netflix in March

Netflix has announced three originals so far for March 2021. First up is Bombay Begums from Alankrita Shrivastava (Lipstick Under My Burkha), a series...
Read more