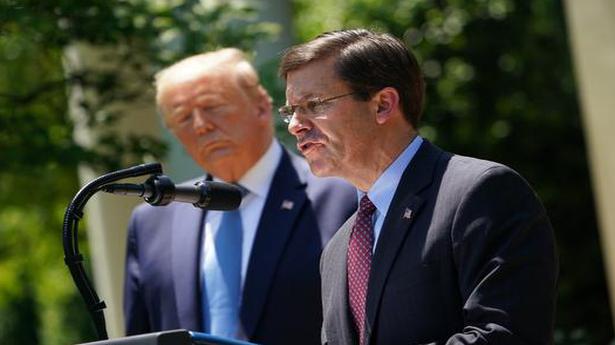 “Mark Esper has been terminated. I would like to thank him for his service,” Mr. Trump said on Twitter

U.S. President Donald Trump said on Monday that he had “terminated” Defense Secretary Mark Esper, appearing to use his final months in office after his November 3 election defeat to settle scores within his administration.

Mr. Trump, who publicly split with Mr. Esper in recent months over a range of issues, said on Twitter that Christopher Miller, director of the National Counter-terrorism Centre, will become acting secretary of defense. The Senate would be highly unlikely to confirm any new nominee before Mr. Trump leaves office in January.

“Mark Esper has been terminated,” Mr. Trump said on Twitter. “I am pleased to announce that Christopher C. Miller, the highly respected Director of the National Counter-terrorism Center (unanimously confirmed by the Senate), will be Acting Secretary of Defense, effective immediately.”

Mr. Esper had long been preparing for the prospect of his resignation or dismissal following the November 3 election, particularly if Mr. Trump were to win a second term in office, sources said.

Mr. Trump has steadfastly refused to acknowledge his election loss.

Mr. Esper angered Mr. Trump particularly by opposing Mr. Trump’s threat to use active duty troops to suppress street protests over racial injustice in the United States during the summer.

If the Left parties, Akali Dal, Shiv Sena, YSRCP, TRS oppose it, the government would not have a majority...
Read more
Entertainment

NITI Aayog's Committee of Chief Ministers for the Transformation of Indian Agriculture held its last meeting in September 2019. More than a year later,...
Read more
Trending

CBI suspends its 2 personnel for taking bribe, recommends action against...

Firefighters confirmed the deadly incident in the town of Lanuvio, with the hypothesis of a gas leak Five elderly residents of a nursing home...
Read more

Operations were focused on about eight locations in the hardest-hit city of Mamuju, where people were believed to be trapped. Damaged roads and bridges, power...
Read more
Bharat News