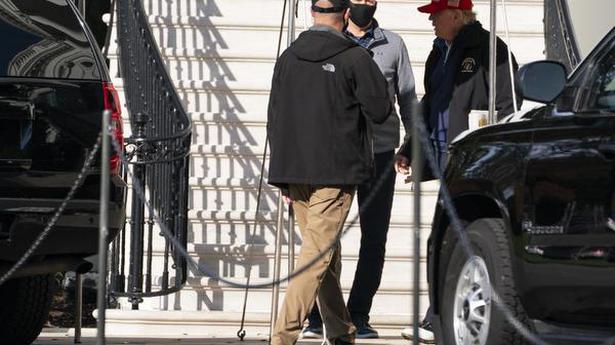 The crowd cheered as Mr. Trump’s limousine neared and people lined both sides of the street. Some stood just a few feet away from Mr. Trump’s vehicle; others showed their enthusiasm by running along with the caravan.

President Donald Trump delighted supporters gathered near the White House on November 14 with a slow motorcade drive-by through downtown Washington on the way to his Virginia golf club.

A week after the presidential race was called for Democrat Joe Biden, hundreds of Trump loyalists converged on the nation’s capital to protest the election results and falsely assert the vote was stolen.

Mr. Trump persists with his claims and complaints even though a broad coalition of top government and industry officials has declared that the November 3 voting and the following count unfolded smoothly with no more than the usual minor hiccups — “the most secure in American history,” they said, repudiating his efforts to undermine the integrity of the contest.

The crowd cheered as Mr. Trump’s limousine neared and people lined both sides of the street. Some stood just a few feet away from Mr. Trump’s vehicle; others showed their enthusiasm by running along with the caravan.

They chanted “USA, USA” and “four more years,” and many carried American flags and signs to show their displeasure with the vote tally. After a slow drive around Freedom Plaza, where the pro-Trump rallies began, the motorcade headed to the president’s club.

Also read | Trump is not conceding. What’s next?

The “Million MAGA March” was heavily promoted on social media, raising concerns that it could spark conflict with anti-Trump demonstrators, who have gathered near the White House in Black Lives Matter Plaza for weeks.

In preparation, police closed off wide swathes of downtown, where many stores and offices have been boarded up since Election Day. Chris Rodriguez, director of the city’s Homeland Security and Emergency Management Agency, said the police were experienced at keeping the peace.

“People who come to the District know that you can’t bring weapons to our city and that violence will not be tolerated,” Mr. Rodriguez said.

The issues that Mr. Trump’s campaign and its allies have pointed to are typical in every election — problems with signatures, secrecy envelops and postal marks on mail-in ballots, as well as the potential for a small number of ballots miscast or lost. With Mr. Biden leading Mr. Trump by wide margins in key battleground States, none of those issues would have any impact on the outcome of the election.

Mr. Trump’s campaign has also filed legal challenges complaining that their poll watchers were unable to scrutinise the voting process. Many of those challenges have been tossed out by judges, some within hours of their filing.