Effect of polls, festivals yet to play in full, warns Health Ministry 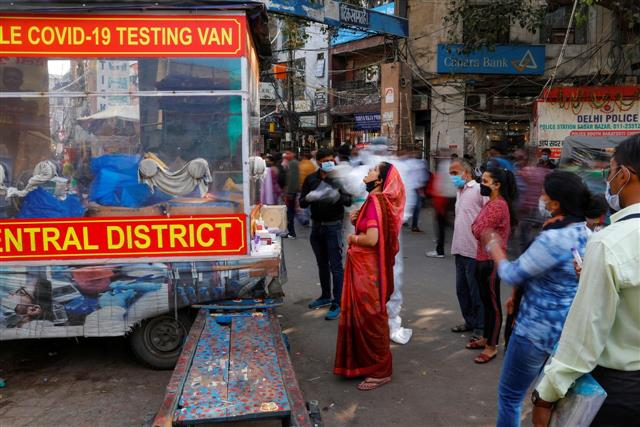 The effect of the recent polls and festivals like Durga Puja, and Diwali, among others, on the Covid-19 situation are still play out in full, the Union Health Ministry warned on Tuesday.

Addressing a press conference, Union Health Secretary Rajesh Bhushan said Delhi was testing very less in June at around 5,776 tests per day and that number rose to over 50,000 in September which after that plateaud out and the recent spike of COVID cases may be because many positive cases escaped the net.

“As part of Covid-19 appropriate behaviour, citizens must ensure that if they are experiencing any symptoms, then they must get tested. Don’t hesitate, get yourself tested,” he said.

About the national capital, where cases have risen alarmingly and Delhi Chief Minister Arvind Kejriwal sought the Centre’s help, the Health Ministry said that in June, Delhi had carried out very few tests per day. But, this number rose to 50,000 in September and plateaued out.

Expressing disappointment, the ministry said the implementation of the Central SOPs had become lax in spite of Delhi having more than 4,000 containment zones.

It noted that now, an active case search, and house to house surveillance need to be stepped up in the national capital.

Union Home Minister Amit Shah had held an emergency meeting on Sunday, where he had issued 12 point instructions, including on augmenting ICU beds and doctors, and cracking down on those not following Covid-appropriate behaviour.

Niti Aayog member Dr V.K. Paul, who was also present at the media briefing, said that the ministry is ensuring that 16 people are being traced for every positive case in Delhi.

House to house surveys will also be conducted in containment zones.

The Health Ministry also said that increased ICU beds, more RT-PCR testing and quarantine contacts are some of the efforts they are taking to ensure the situation in Delhi is contained.

Bhushan said: “Since the month of October, the number of cases are at a record high. Though fewer cases have been detected in the last 48 hours, but we can not come to a conclusion now, right now.” But the Health Ministry is preparing for a more serious situation in Delhi, should it arise.

Paul said: “If cases go up, we will ramp up our capacity to monitor people in home isolation to 40,000 at any given time. We have kept a plan along with the Delhi government ready.” About the progress of vaccines, Paul added that the one of the Serum Institute is in the third phase. Meanwhile, at least five vaccines are under trial in India, out of which two are in the third phase, he added.