‘Enjoy batting at five and keeping’ 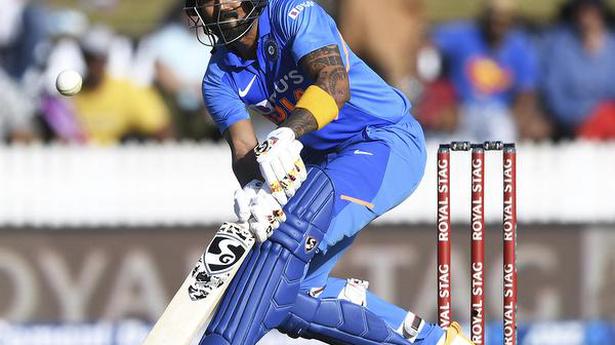 If I’m consistent in both, it will give us an option of extra bowler or batter: Rahul

With Rohit Sharma ruled out of the limited-over leg of the Australia tour as he recovers from a hamstring injury, India will depend on K.L. Rahul in the batting department. While Rahul is familiar with batting in the top-order, he insists his position will vary depending on the format.

“It will depend on the formats, what the team wants of me and what combination sits better… The last ODI series we played, I batted at No. 5 and kept wickets, so yeah that’s a role that I quite enjoyed,” Rahul said during an online media interaction on Wednesday.

In his maiden outing as the designated ’keeper batting at No. 5, in the second ODI at Rajkot, Rahul slammed 80 off just 52 deliveries. He also hit 88 off 64 in Hamilton and 112 off 113 in Mount Maunganui on the tour of New Zealand, playing the same role.

Asked if he was entrusted with the gloves, keeping in mind the two back-to-back World T20s, Rahul said, “Nothing has been conveyed to me [by the selectors]. We, as a team, aren’t thinking that far. World Cups are very important and that is the long vision for every team.

“But for me, it’s about taking one game at a time, and if I keep putting up consistent performances with the bat and the gloves, it gives us the option of playing an extra bowler or a batter.”

Staying in the moment

“I learnt from the IPL to stay in the moment… when I am batting, I think like a batter, assess the conditions and see how as a batter, I can win the game.

“When I am ’keeping, it is important I switch on as a ’keeper and not keep thinking as a leader. That’s going to be the key going ahead for me.

“I share a decent understanding with Yuzi [Chahal], Jaddu [Ravindra Jadeja] and Kuldeep Yadav and will probably give them feedback about what I feel is a better length or pace to bowl.

“Hopefully, I can get better at reading the game and give good feedback to the bowlers and the captain.”