Explained | A ‘lie’ that locked down South Australia 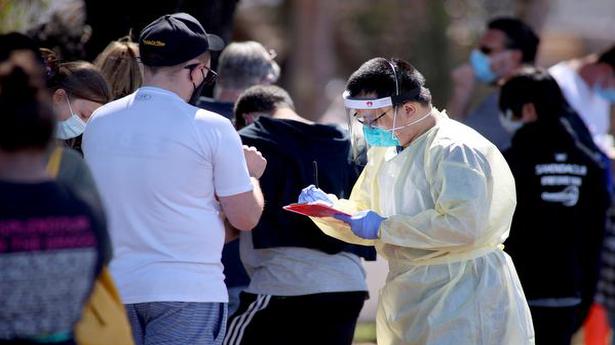 South Australia officials said on Friday a “lie” led to the harshest coronavirus lockdown yet in the state as contact tracers were initially led to believe a man was infected with a highly contagious virus with a much shorter incubation period.

In a shock announcement on Friday, South Australia state Premier Steven Marshall said the six-day strict lockdown would be lifted earlier-than-expected, at midnight on Saturday, as the virus was not as contagious as initially thought.

Mr. Marshall reiterated it was still a “dangerous” cluster with 25 infections and about 4,500 close contacts in quarantine.

How did the infections begin in South Australia?

A security guard at a quarantine hotel, who also worked part-time at a pizza parlour, in the state capital of Adelaide, the Woodville Pizza Bar, was infected through a returned traveller from the UK.

A second worker, not identified by the authorities by name, at another quarantine hotel in the city also became infected. Authorities said the man told contact tracers that he had only purchased a pizza from the same bar, when in fact they later discovered he worked several shifts there.

Authorities worked on the premise that the man had contracted the virus from a very short exposure while buying pizza, leading them to believe he must have been exposed to a highly contagious strain.

What are the implications?

“Had this person been truthful to the contact tracing teams, we would not have gone into a six-day lockdown,” Mr. Marshall told a news conference in Adelaide on Friday.

A second consequence is that contact tracers now need to find and isolate a whole new group of people who have had contact with the man.

“There is an absolute need for us to move quickly over the next 24-36 hours to identify and locate these people so we know we have eliminated the risk of this particular strain spreading further into the community,” Mr. Marshall added

How did authorities find out?

The contact tracing team sat down and interviewed the worker. Another team reviewed the information obtained in the interview, but wasn’t satisfied with “the feeling they got from this”, South Australia Police Commissioner Grant Stevens said, speaking at the conference.

The review team went back to re-interview the man, who finally disclosed he worked several shifts at the pizza bar.

Mr. Marshall said it was not yet clear what the man’s motivation was.

Are there any penalties for those misleading contact tracers?

No, though the current law would likely be reviewed.

“There is simply no mechanism for us to actually take any further action,” Mr. Marshall said.

Is South Australia out of the woods yet?

No. Authorities are still trying to locate thousands of people who may have had “dangerous contact” at the Woodville Pizza Bar.

The state’s chief public health officer, Nicola Spurrier, also warned that the number of cases in South Australia would rise over the next couple of days, though those individuals are already in isolation and are not a threat to the wider community.

With the Central Board of Secondary Education (CBSE) announcing how the Class 12 marks are to be tabulated. Students...
Read more
National

Former Chief Minister M. Karunanidhi, who was among the first 15 members of the DMK to enter the Legislative Assembly in 1957, had earnestly...
Read more
National

Former Chief Minister M. Karunanidhi, who was among the first 15 members of the DMK to enter the Legislative Assembly in 1957, had earnestly...
Read more
National

The Uttar Pradesh government has relaxed the night curfew by two hours from June 21, allowing opening of shops, malls and restaurants till 9...
Read more
World

Rick Hutzell, who worked at the Annapolis paper for more than three decades, authored a farewell column that was published on the paper’s website...
Read more
- Advertisement -

Rick Hutzell, who worked at the Annapolis paper for more than three decades, authored a farewell column that was published on the paper’s website...
Read more

Russia's national coronavirus taskforce on June 19 reported 17,906 new infections, more than double the daily tally from early June.More than half of the...
Read more

The U.S. is pushing the trans-Atlantic military alliance, originally formed to counter the Soviet Union, to take a stronger position towards China In a...
Read more

Apple Daily | In the line of fire

Apple Daily vows to carry on and publish as usual,” read a headline in Friday’s edition of Apple Daily, the outspoken tabloid...
Read more
- Advertisement -