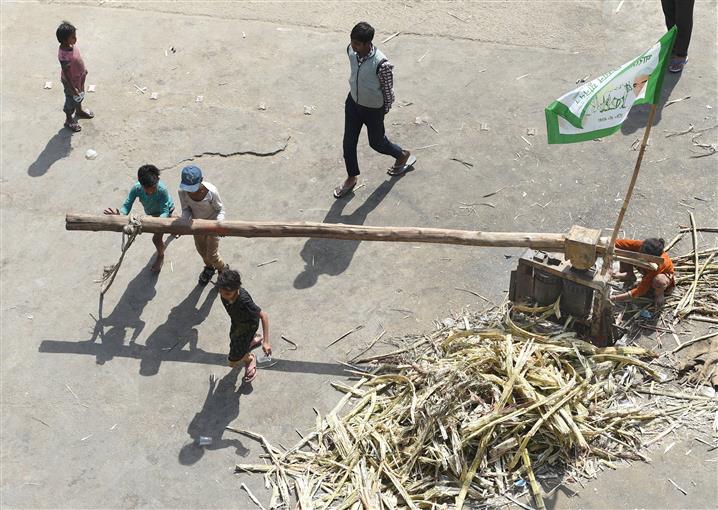 The old saying that “agriculture is the best way to earn a living and working for someone else is the worst” has given way to new realities, says Raj Kumar, a farmer from Satheri village in this western Uttar Pradesh district, a region where farmers’ agitation seems to be driven more by the “stagnant” sugarcane prices and the stray cattle menace, than by the three contentious agri laws.

Kumar, a Rawa Rajput, says sugarcane prices have not been raised for the past several seasons, whereas companies have reduced the size of Urea and DAP bags, making manure costlier and agriculture “unsustainable”.

“Pehle kehte the, Uttam Kheti—Beech Vyapar—Neech Naukri. Ab to sab ult gaya hai, (We used to say agriculture is the best way to earn a livelihood, followed by trade or business and the worst was to be working for someone else. This wisdom seems to have crumbled),” says Kumar.

Muzaffarnagar, a western Uttar Pradesh district, is not very far from Delhi which has seen its three border points turn into tent cities as farmers protesting against the three new Central agricultural laws, which open up the sector for private players, have been camping there for close to three months now.

But on the question of farm laws, Kumar says he doesn’t know much about them but he has been supporting the protesting farmers as agriculture has become “unsustainable”.

Echoing similar sentiments, Roshan Lal, a Saini by caste and a small-scale farmer, said more than the three farm laws, it is delay in payment for sugarcane and the rising diesel prices, along with the problem of stray cattle that have made their lives miserable.

“More than farm laws, no hike in cane prices, delay of over a year in payments of sugarcane and the menace of stray cattle have broken our back,” Lal said, standing by Kumar. “All this has forced us to raise their voices for farmers’ issues.”

Sohan, a Kashyap (Jhimir) by caste from Ganshampura village who owns less than 1 acre land and uses his crop mostly in his jaggery workshop, says until and unless sugarcane prices are increased the prices of jaggery would also remain stagnant.

“Yahan to inkh hi sab kuchh hai…uska dam badhega toh gud ka daam bhi badhega warna toh mazdoori bhi bachna mushkil hai (Here sugarcane is everything. If its prices increase, the prices of jaggery will also go up otherwise it would be difficult to pay even wages),” he said.

Sohan said he has heard about farm laws but doesn’t know much about them. He also flagged the issue of stray cattle.

All three—Ram Kumar, Roshan and Sohan—underlined the importance of sugarcane prices and timely payments to farmers and expressed limited reservations about farm laws which is based on the information shared by farmer leaders.

The opposition to these laws becomes louder and more visible as one moves towards the Jats-dominated areas in the western Uttar Pradesh.

In the Shoram village, which is seen as the headquarters of Khaps (caste councils) of Jat community, a mere mention of farm laws evokes strong response.

“These laws are not only against the farmers but against the country…those who are guarding the borders are our sons and behind their back you are trying to snatch the rights of their brothers who are into farming,” said Bhupender Choudhary, a villager.

Tikait, himself a Jat, hails from Sisoli village in Muzaffarnagar district.

The protest will continue till the government takes back farm laws, says Vipin Balyan, a 35-year-old farmer from the Shoram village. “The proponents of these black laws will pay heavily in coming elections.”

Both Bhupender and Vipin also expressed concern about the “stagnant” sugarcane prices, delay in payments to sugarcane farmers and the havoc caused by stray cattle, saying that all these are damaging farmers economically.

However, most of the farmers whom the PTI spoke to in the region said they are receiving annual Rs 6,000 government assistance under the PM-Kisan Samman Nidhi Scheme started by the Centre.

The entire western Uttar Pradesh has been witnessing a number of Mahapanchayts organised either by khaps or farmer leaders or political parties against the farm laws.

The sugarcane crop, the mainstay of the farmers in the region, is cultivated on more than 80 per cent of the arable land in the districts of western Uttar Pradesh.

As per the data provided by All India Sugar Traders Association (AISTA), the Fair and Remunerative Price (FRP) of Sugarcane was at Rs 255 per quintal for 2017-18 season and increased to Rs 285 per quintal in 2020-21 season.

Whereas the Uttar Pradesh government’s State Advisory Price (SAP) is fixed at Rs 315 per quintal for the last four seasons from 2017-18.

There are nearly 50 sugar mills in the region besides a large number of jaggery workshops. Several sugar mills have not cleared farmers’ dues of last season, according to farmers.

Agriculture experts say a farmer cultivates on an average 900 quintal of sugarcane in one hectare of land in one season which is of about nine months.

The farmer spends on an average around more than Rs 2 lakh per hectare including all its expenses during a season on sugarcane crop. PTI

The Indian film industry is on the backfoot once again as the country battles an aggressive second wave of...
Read more
Business