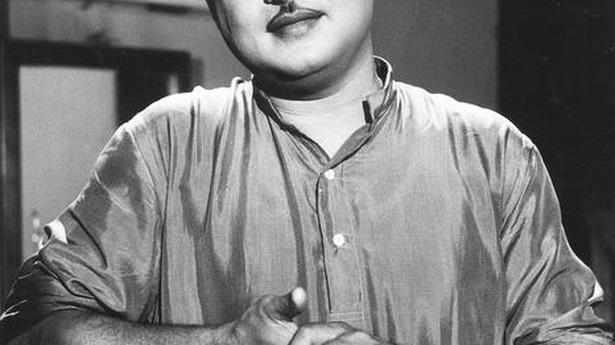 On his centenary birth anniversary, actor Gemini Ganesh is still hailed as the unparalleled ‘kaadhal mannan’ or ‘King of Romance’. In a career spanning five decades with over 200 films to his credit, the veteran actor starred in critical and commercial successes and managed to carve a niche for himself.

A chemistry honours graduate from Madras Christian College who also worked as a demonstrator on the campus, Ganesh initially started off as a casting assistant in Gemini Studios. While he debuted in 1947 in the Gemini Studios’ production Miss Malini, it was the 1953 film Manampola Mangalyam, where he played the main double role, which was a runaway success and catapulted him into the limelight.

Speaking to mediapersons back in 1957, the actor spoke about how unlike most Tamil artistes, he had little or no experience of the stage and so he suffered from no inhibitions.

Kaaviya Thalaivi, Naan Avan Illai, Mayabazaar, Kappalotiya Thamizhan, Missiamma, Then Nilavu and Vanjikottai Valiban were among his many notable films. Gemini Ganesh, Sivaji Ganesan and M.G. Ramachandran were a celebrated golden trio as their films dominated the Tamil film industry in the 1950s.

“The simplicity with which he led his life permeated into his acting and movies as well. In many of his movies, his onscreen persona as a simple, family man was someone with whom audiences at that time could relate to,” said Abhinay Vaddi, Gemini Ganesh’s grandson.

The entrepreneur and actor said that he remembered his grandfather being very particular about replying to every fan mail that he had received. “He struck a sort of balance onscreen which made his acting honest and sincere. My favourite films of his were Missiamma and Mayabazaar. While many remember Sivaji Ganesan and my grandmother Savithri from the film Pasamalar, I enjoyed my grandfather’s performance a lot in that film,” he added.

An “extraordinarily affectionate person” is how Jaya Shreedhar, the actor’s daughter described him. “One of the best things we learnt from him was how he never differentiated between people based on anything,” she said.

Dr. Shreedhar recalled how he cooked as enthusiastically for his fans as he would for the family. “He broke gender stereotypes and was an extremely progressive person. This is best evinced in how he took up a number of roles where he played the supportive male character in films which had his female co-stars essaying strong roles,” she said.

The daughter of the veteran actor said her father didn’t think twice about ensuring that she and her sisters were well educated. “As a dad, he has laid the foundation for where I am today,” she said. While his performance in Sumaithangi is one of her favourites, Dr. Shreedhar also recalled how during the shooting of Avvai Shanmughi, her father was not keeping too well and yet managed to give a memorable performance.

On the occasion of his birth centenary, his daughter, a leading obstetrician and fertility specialist Kamala Selvaraj released a series of videos on her YouTube channel featuring several members of the Tamil film fraternity who spoke about their association with the veteran actor.

Actor Kamal Haasan, who made his debut in film as a child actor in Kalathur Kannamma which starred Gemini Ganesh and Savithri in the lead roles, reminisced about ‘Gemini Mama’ and said that he was the first ‘cinema hero’ he had met on set.

“I have organically learnt many things from him. He is someone who brought happiness to all our lives and there is no other way I can remember him,” the actor said, in a video. His contemporary, veteran actor Vyjayanthimala, who has starred opposite him in several films, recalled him as a jovial, cheerful person on set who was very easy to get along with.

“Apart from leaving a legacy that has inspired a generation of movie lovers, he had a larger-than-life personality that today is the stuff of legends,” he said.

The Allahabad High Court has sought a response from the Sitapur district administration in Uttar Pradesh on the “exorbitant”...
Read more
Trending

The Supreme Court has stayed a controversial Bombay High Court verdict, which acquitted a man found guilty of assault under Protection of Children from...
Read more
Sport

The Allahabad High Court has sought a response from the Sitapur district administration in Uttar Pradesh on the “exorbitant” amount of personal bonds and...
Read more

The Supreme Court has stayed a controversial Bombay High Court verdict, which acquitted a man found guilty of assault under Protection of Children from...
Read more

The Minister said that this move is expected to impact farmers of 12 coastal States. The Minimum Support Price of copra has been increased...
Read more
Bharat News