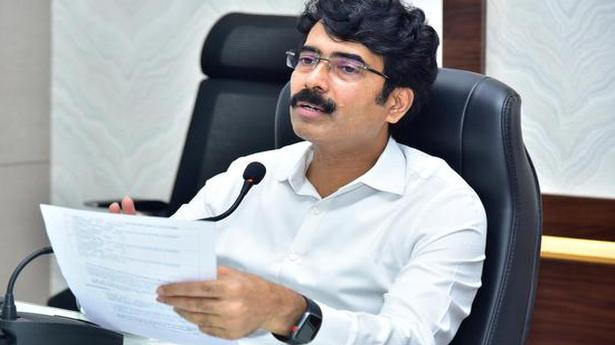 Polavaram Project Superintendent Engineer Medapati Nagireddy on Tuesday said that supply of water from river Godavari would be stopped at Polavaram project from coming March 31 as Cofferdam work would commence from April.

In the joint meeting of the Irrigation Advisory Boards (IAB) of East and West Godavari districts held in Rajamahendravaram, Mr. Nagireddy said: “The construction work of the Cofferdam in the Cap-3 (300 meter length) will begin in April and complete by June as part commissioning the project by December 2021”.

“Maximum of 9000 cusecs of water per day can be supplied till March 31. The farmers are required to go for the 90-day duration crop varieties of paddy instead of 120 or 130-day crop varieties in the Rabi season 2020-21. We do not have any alternative way to manage the schedule as per the plan of the Polavaram Project Authority,” said Mr. Nagireddy in response to request to release water till Mid April to save the Rabi season in the Godavari delta.

The authorities of East and West Godavari districts have been asked to manage the situation by storing the water in various sources including ponds to meet the water need for drinking and livestock.

In the Rabi season, the normal acreage under paddy cultivation is 4.36 lakh acres in East Godavari and 4.60 lakh acres in the West Godavari district in the Central, Eastern and Western delta of river Godavari.

East Godavari Collector D. Muralidhar Reddy said: “Above 75% of harvesting of paddy in the Kharif season is yet to be completed. In Rabi, the crop duration of the Paddy varieties preferred in the district is 120-130 days, needing water after March in the Rabi season. The Konaseema will be the most affected if the water supply is stopped from April 1”.

“Given the priority of the Polavaram project, the management of the water is need of the hour with the coordination between the Agriculture and Irrigation departments,” Agriculture Minister Kurasala Kannababu observed.

“The Polavaram Cofferdam closure period – March to June 2021- should be dedicated for modernisation and mainteinance of the irrigation systems. The action plan should be prepared in this regard,” said Mr. Kannababu.

World champion Lewis Hamilton edged out the Red Bull duo to claim pole position for the Emilia-Romagna Grand Prix on Saturday. It was his...
Read more
Business

SpiceJet on Saturday said passengers will not be charged any fee for changing the date or time on their tickets at least five days...
Read more
National

Two days after its vaccine stock dried up, the State received six lakh doses of Covishield and Covaxin vaccines from the Centre on Saturday....
Read more
Bharat News