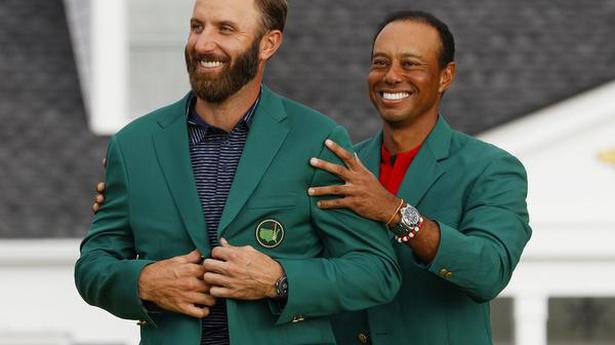 The 36-year-old American, known for keeping his cool on the course, was in tears after winning the green jacket only an hour’s drive from where he grew up. “It’s a dream come true,” a crying Johnson said. “As a kid I always wanted to become a Masters champion. It’s just incredible.”

Johnson, whose other Major victory came at the 2016 US Open, fired a four-under 68 to finish on a Masters record 20-under 268. That was good enough for a five-stroke triumph over South Korean Im Sung-jae and Australian Cameron Smith with third-ranked American Justin Thomas fourth on 276.

Johnson’s score in relation to par matched the lowest in Major history and smashed the old 72-hole Masters mark of 18-under 270 set by Tiger Woods in 1997. It was an incredible turnaround for a player who missed his planned Masters tune-ups after contracting COVID-19 last month, returning only last week with a runner-up effort in Houston.

Johnson, who began with a four-shot edge, had never converted a 54-hole Major lead into a title, stumbling at the 2010, 2015 and 2018 US Opens and in August’s PGA Championship, where he finished runner-up.

Johnson is the first reigning World No. 1 to grab the green jacket since Tiger Woods in 2002.

Im had the lowest score for any Masters newcomer but couldn’t become the first debut winner since 1979. Smith closed on 69, becoming the first Masters player to shoot all four rounds in the 60s.

Woods, a five-time Masters winner and 15-time Major champion, found Rae’s Creek three times on his way to a septuple-bogey 10 at the par-3 12th, his worst score ever on a Major hole. He responded with birdies on five of the last six holes to close on 76 and finish on 287.

Germany’s Bernhard Langer, at 63 the oldest to make any Masters cut, shot 71 to finish on 285, one stroke better than US Open champion Bryson DeChambeau, who closed on 73 and never threatened to overpower Augusta, nagged by dizziness.

Samsung Galaxy A52, Galaxy A72 Prices Leak Ahead of Launch: Report

The first man to play 100 Test matches, Colin Cowdrey, was 41 when he was recalled to a struggling England team to take on...
Read more
Business

The first man to play 100 Test matches, Colin Cowdrey, was 41 when he was recalled to a struggling England team to take on...
Read more

CA's report on its investigation said it believed the players had been racially abused but investigators were unable to identify the culprits Australia's cricket...
Read more

James Harden believes the best is yet to come after producing a late burst of scoring to lead Brooklyn Nets to a 98-85 victory...
Read more

Djokovic is our LeBron, but we have to call him out sometimes: Kyrgios

‘Some of us go off track sometimes, and we have to hold each other accountable‘ Nick Kyrgios has likened Novak Djokovic to NBA player LeBron...
Read more
Bharat News